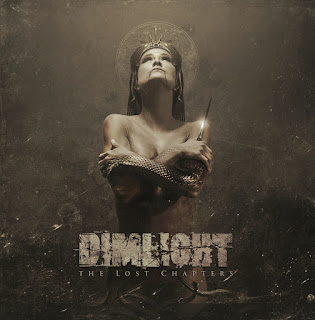 The third full-length from Greek gothic/death metal unit Dimlight offers even more to like here with the bands’ take on symphonically ornate gothic overtones with death metal ferocity. As can be expected here, lush, grandiose keyboards swirl around throughout the majority of the work here which makes for an over-the-top display of orchestral work here from the keyboards being accompanied rather nicely with the operatic vocals being featured. Mixing the striking clean female soaring vocals with the raspy male counterparts may seem like gothic metal basics but it works here with the slow, pounding rhythms at the forefront of the bands’ other attacks. Coming complete with pounding drumming and the occasional deluge into romantic arrangements within the rest of the music here, it’s all quite fun and dynamic here with this one mostly utilizing the up-tempo work and offering plenty of gothic-tinged symphonics to put a lot of enjoyable work on display here. For all this good points, though, the band does tend to fall into minor trouble with the fact that there’s nothing really unique or creative about this kind of symphonically-charged gothic/death metal as it’s pretty basic and by-the-numbers styled work generating all the rather familiar notes here with one-note blistering drumming, up-tempo riffing and orchestral-styled keyboards offering a bombastic symphonic undertone. They’re clearly competent and cohesive enough but not without a lack of identity to really stand out here even if the songs themselves are enjoyable.

The first half here sets this up quite nicely. Instrumental intro ‘The Inception’ features a deep droning noise intro with a spoken-word storytelling set-up that leads into proper first track ‘Spawn of Nemesis’ featuring blistering drumming amidst grand orchestral keyboards charging along into a frantic series of symphonic flurries while keeping the Gothic rhythms at the forefront with the over-the-top keyboards and drumming continue swirling along into the light choppy rhythms throughout the final half for a fun overall effort. ‘Shattered Idols’ uses grandiose symphonics over blazing drumming and tight riff-work carrying along simple rhythms while keeping the over-the-top symphonics buzzing along through the series of thumping patterns with the extended instrumental interlude carrying the symphonics throughout the finale for a dynamic highlight. ‘Invoking the Hunter’ features a dark, haunting swirling series of riffing alongside the sweeping patterns and pounding drumming into a steady mid-tempo attack as the swirling rhythms lift for romantic keyboards and soft riffing that off-sets the quiet energy throughout the final half for a decent enough effort. The instrumental mid-album breather ‘Dark Things of the Desert’ simply serves as a brief storyline segue to lead into the next track.

The second half is rather enjoyable much like the upper half. Bleeding through the previous effort, ‘Children of Perdition’ opens with swirling riff-work and a blistering series of orchestral symphonics alongside utterly raging drumming that soon settles into a mid-tempo series of meandering rhythms and light melodic work carrying through the slight variances in tempos throughout the finale for a solid if unspectacular effort. ‘Torrents of Blood’ takes a swirling operatic intro with the symphonic keyboards leading into blasting drumming and sweeping riff-work leading the tight chugging riff-work and light symphonics plodding along to a slow, sluggish pace with plenty of sweeping orchestral work in the final half for another overall solid-if-unspectacular offering. ‘Fear of Heavens’ uses strong swirling symphonic keyboards alongside blasting drumming with plenty of tight riff-work that flows into a steady mid-tempo series of chugging symphonic patterns with blasting drumming carrying the bombastic keyboards along into the charging symphonic-led finale for a strong and impressive offering. ‘Clash of Immortals’ features light, soft romantic patterns before exploding into furious drumming alongside sweeping majestic symphonic keyboards and light gothic riff-work that deviates nicely between several strong tempos with sweeping orchestral work coming through into the final half for an overall fun effort. Lastly, ‘Fields of Carnage’ takes epic symphonic keyboards and haunting melodic notes to gradually build into crushing drumming blasting throughout the sweeping majestic keyboards that turns into driving mid-tempo symphonics with plenty of tight rhythms and ornate symphonic orchestral movements leading throughout the grandiose finale for a solid lasting impression.

For the most part, there’s a lot to like here with this one that ends up making it one of the more impressive and enjoyable entries in the style and as long as those can stand to overlook the flaws here with this one it’s a solid listen for those who enjoy impressive gothic-tinged metal or symphonics as well.

Does it sound good? Order from here:
http://www.dimlightband.com/shop/the-lost-chapters/
Posted by slayrrr666 at 11:49 AM