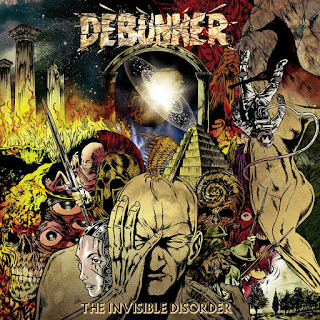 The debut EP from Portuguese groove-laced thrashers Debunker starts off their career in fine form with a rather appealing and intriguing effort with a lot to like. This here is mostly based around the kind of tight, raging groove riff-work which is quite an appealing ploy by enabling a kind of vicious, intense aggression to the tracks which makes for quite an impressive take here that comes from that kind of tightly-wound groove throughout the effort. There’s even a sense of variety within the tempos as well where there’s a difference in the driving riff-work full of more atmospheric parts to the tracks that’s somewhat removed from the straightforward pieces that typify more groove-centered efforts, and that’s a quite impressive mixture for these styles to get pulled off throughout here, though it does seem to feel a little short overall here with the short tracks sometimes being quite abrupt before it leads into the next effort. This quite easily could’ve been a more full-length.with the work here, and this really starts building up to a great time before it quickly ends, which really keeps it down.

The tracks here are quite fun and have a lot to like. The title track opens into a rousing series of rumbling drumming and tight, groove thrashing that settles into a rousing mid-tempo thumping pace as the swirling groove rhythms keep the utterly pummeling drumming through the surging solo section and on through the blasting final half for an utterly impressive opening effort. ‘The Logical Zombie’ features tight, swirling riffing pounding alongside the tight drumming into a stylish mid-tempo series of rhythms keeping an intense series of churning riff-work thumping along to the blistering and frantic solo section and holding on through the finale for a slightly weaker but still enjoyable track. ‘After the War’ uses a tight, simple series of groove-filled riff-work with a steady, simplistic pace leading along through the up-tick into more energetic and thrash-filled rhythms into a charging solo section and moving along throughout the pounding drumming of the final half for a strong overall effort. ‘Red Shift’ takes a strong, immediate groove riff through a raging, tight blast of frantic energy through the charging rhythms with a series of strong, pounding drumming thumping along to the rather simplistic rhythms with the soaring solo section keeping up the intensity into the finale for a strong and enjoyable effort. Lastly, album-closer ‘Blindsided’ takes a simplistic and gradual build-up series of riffing into the series of frantic groove rhythms and pounding drumming keeping the simple rhythms and the fine thumping drumming that works along the solo section and into the charging final half for an enjoyable effort that ends this one nicely.

Though it does seem a little short with it’s brief ending overall, there’s still a plentiful vibe and energy that carries throughout the tracks here that makes it quite enjoyable which starts off their career nicely, making for a suitable time for those into the more aggressive and brutalizing thrash efforts.

Does it sound good? Order it from here:
http://debunker.bandcamp.com/
Posted by slayrrr666 at 4:17 PM