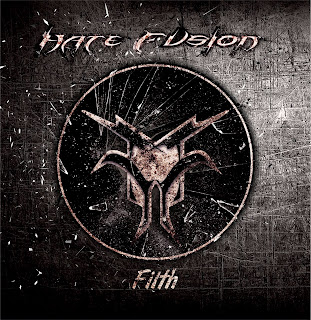 The debut effort from Argentine melodic death metallers Hate Fusion isn’t really out to reinvent the wheel when it comes to the genre but still manages quite a decent showing in the style regardless. This here is pretty straightforward and simplistic melodically-styled death metal which is anchored rather nicely by the heavy chugging riff-work that takes the form of most modern melodic death metal which features that style. For the most part, this keeps the material firmly in the mid-tempo charge with the occasional burst into faster tempos with the influx of cleaner riff-work that is further augmented rather well with the addition of clean crooning in select passages while the harsher rasp takes on the majority of the work that doesn’t overdo a tactic to keep it’s impact solidly in place while still holding true to the tenets of the style and genre. As expected, the faster tempos kick the energy up even with some solid tempos and pacing on display elsewhere here with the mid-tempo charges, and on the whole this one comes off with a sense of professionalism that’s very enticing and rewarding. Still, there’s one main running problem throughout this one in that it’s rather fundamental and unoriginal, tending to play by the rules and convictions of the genre without really doing anything all that dynamic or unique with it. It’s all competence without originality, and that can tend to wear thin at times when this one starts going along at the second half when it’s simply doing the same thing without much difference in style or attack.

The first half here is a solid and enjoyable part of this one. Opener ‘Torture Techniques’ utilizes strong choppy rhythms and steady, straightforward drumming keeping the whirling melodic leads running alongside the chugging grooves and stylish up-tempo rhythms that bring the clean vocals into the urgent solo section and on through the final half for a solid opening impression. ‘Under’ offers a plodding melodic intro that settles into a steady, simplistic chug with swirling melodic leads alongside simplistic patterns before rattling along to a dramatically more urgent series of rhythms with the energetic riffing carrying the tight rhythms into the solo section and on through the finale for another highly enjoyable effort. ‘Catharsis’ uses simple melodic chugging and mid-tempo drumming carrying along a series of tight swirling leads driving along through the steady patterns with plenty of tight chugging patterns with the melodic leads over the buzzing mid-tempo solo section and keeping the tight rhythms throughout the urgent final half for a solid highlight effort. ‘The Hunter’ immediately blasts through intense drumming and urgent, up-tempo chugging riff-work keeping the steady mid-tempo rhythms along throughout the tight thrashing patterns alongside melodic leads with plenty of pounding, chaotic drumming leading into the solo section and chugging along into the finale for another solid track. ‘Conquer Your Fears’ takes simplistic drumming and tight charging rhythmic chugging alongside simplistic patterns with the choppy drumming holding the melodic leads into the intense drumming patterns and urgent rhythms leading along the solo section and keeping the up-tempo energy through the final half for a decent enough effort.

Though down a minor step, the second half still has a lot to like overall here. ‘Rolling Dick’ takes a simplistic and straightforward mid-tempo plodding riff with steady drumming before kicking into a higher gear with more urgent riff-work and kinetic pounding drumming that continues to hold the simplistic rhythms along throughout the finale for a decent if unspectacular offering. ‘Death Bringer’ offers a charging series of melodic chugging riff-work and tight pounding drumming letting the melodic leads hold the simple melodic rhythms into the plodding mid-section as the stylish chugging riff-work keeps the energetic patterns and pounding drumming on through the swirling final half for a stronger and more impressive highlight. ‘Fields of Blood’ uses a simple charging riff with plenty of tight melodic leads running alongside the pounding drumming with a strong series of chugging rhythms keeping the mid-tempo pace along at a steady pace with the furious drumming leading the urgent tempos through the melodic solo section and on into the finale for another impressive showing. ‘The Darkest Angel’ features straightforward and simplistic riffing with pounding drumming carrying along a charging up-tempo urgent pace with a stylish series of melodic leads keeping the intensity down throughout the mid-section as the choppy rhythms and up-tempo drumming carry on through the final half for another strong effort. Album-closer ‘Centuries of Aggression’ utilizes a swirling series of melodic leads with straightforward riffing and plenty of dynamic drumming keeping the up-tempo pace balanced with the tight chugging rhythms and pounding drumming running along to the series of strong patterns along throughout the pounding rhythms into the solo section and along throughout the finale for an enjoyable lasting impression here.

Though this here isn’t the most original of efforts into this particular field, it’s still competent enough and features enough points to like that the progress of the band in the future is going to be fun to watch especially for devout melodic death metal fanatics as well as those curious about other South American scenes not influenced by the extreme end of the spectrum.

Does it sound good? Order from here:
https://www.facebook.com/HateFusionarg
Posted by slayrrr666 at 4:46 PM