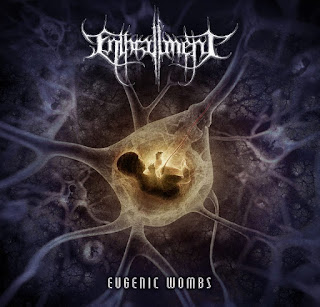 The fifth full-length from Bulgarian death metallers Enthrallment continues their assault of grind-laced brutality and bludgeoning musicianship into a tight and enjoyable release. Keeping in fine form with how the band has been since the beginning, this here is basically a combination of low-slung churning death metal rhythms laced with tight grindcore-laced rhythms. It’s a fine, appealing mixture full of blasting rhythms and furious bursts of speed, generating the kind of intensity and flaying rhythm-work expected mixing these styles together. Though the rumbling rhythms here do tend to come off in more mid-tempo paces than would be expected here, there’s an ease with which they fire off the dexterous soloing and lead-work on the album which is a decided highlight.  Added together with the blasting drumming and there’s a solid, deep-set base at work here with how it manages to generate that style of brutal death metal and slight grind influences. Still, there’s one major piece running throughout the work here that does tend to hold this one back. As already mentioned, this one tends to stick in the mid-tempo more often than really letting the grind rhythm really let loose, it does tend to come off feeling restrained and held back. On the whole, there’s always the sense that they really could’ve gone further with how they go about the mid-tempo arrangements here that really don’t operate at their most expressive or dynamic, instead feeling more like they’re operating under general rhythms for what’s expected of the genre rather than go through their own distinctive touch. It’s not much of a real problem on several tracks but this does crop enough.

The first half is a solid example of what’s on offer here. Opener ‘Deserved Fears’ blasts through intensive riffing and dynamic drumming with tight patterns offering plenty of full-speed twists and turns along through the churning riff-work leading along through the grinding chugging and frantic blasting drumming into the solo section and on through the charging finale for a great opening impression. ‘Few Are Those Who Find It’ uses a faded noise intro before turning into a series of grinding, chunky riff-work and steady, mid-tempo paces keeping a steady drive into the clanky rhythms and blasting drumming twisting along through the fiery solo section and on into the extended churning final half for an overall enjoyable effort. ‘Last Judgment Waltz’ features funky bass-lines and tight clanging drumming settling into a light blasting series of riffing with plenty of steady grinding riffing leading into the rattling drumming and rather furious rhythms keeping the mid-paced intensity through the grinding patterns in the finale for a rather strong effort overall. ‘Totally Dismembered’ uses rattling drumming and tight, grinding riffing riff-work with steady mid-tempo paces keeping the steady rhythms twisting alongside the dynamic drum-work as the grinding patterns lead into the dynamic, fiery solo section and keeping alongside the chugging mid-tempo leads in the final half for another solid effort. ‘Defame the Incarnation’ uses grinding patterns and rather intense drum-work blasting along through a frantic series of mid-tempo riff-work grinding along with tight, dynamic rhythms along through the frantic solo section and carrying the intensity through the finale for an enjoyable enough track.

The second half continues on with the work on offer here. ‘Inspired Lunatic’ features tight, intense grinding riff-work and plenty of blasting drumming through a fine mid-tempo pace loaded with tightly-wound patterns and plenty of frantic rhythms rumbling along through the grinding tempos leading into the solo section and keeping the rumbling riffing throughout the final half for a solid effort. ‘Path to Silence’ takes rumbling grinding patterns and blasting drumming running along through toughened mid-tempo patterns holding the tight, frantic rhythms along through the grind-laced patterns and full-on intensity of the fiery solo section leading through the fine finale for a fun overall highlight. The instrumental ‘Nature Does Not Allow Doubling’ uses light acoustic work and soft bass-lines for a light, relaxing air as it leads into album-closer ‘Enslaved by Your Own Seed’ which uses tight rhythms and rather intense patterns holding the tight grinding riff-work along through the dynamic leads that flows through the frantic mid-tempo rumbling rhythms as the main solo section leads into the extended instrumental final half for an enjoyable lasting impression.

While it’s not overtly original or dynamically full of innovation, this is still a solid, enjoyable slab of churning death metal that stays the course with the bands’ output and in the end remains a solid choice mainly for fans of the band or the genre for the most part while others will likely find it disposable more than anything.

Does it sound good? Order from here:
http://enthrallment.bandcamp.com/
Posted by slayrrr666 at 4:53 PM