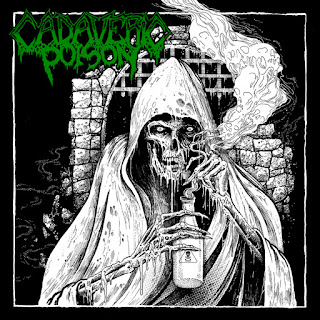 The self-titled debut from International death/thrash supergroup Cadaveric Poison offers a lot of exceptionally strong work overall that makes them a potential powerhouse in the genre. This here is mostly all about simplistic, straightforward riffing featuring low, deep rhythm patterns creating a dark, heavy atmosphere that permanently dwells over the entire release emanating from the riff-work. There’s a certain dynamic spreading throughout the album as the cause of the straightforward, simplistic patterns keeps this charging along at pretty frantic, strong up-tempo paces that are far more enjoyable when it really lets loose with these arrangements as the heavy thrashing melds together incredibly well with the primitive death metal riff-work. Off-set by the ability to drop into a stellar mid-tempo sprawl that still maintains that evil, dark atmosphere for a sense of variety, this all makes this a wholly enjoyable and cohesive effort which does manage to highlight the one big flaw throughout here. The fact that the material does come off with a cohesive sound that it feels awfully familiar quite quickly here as it goes about doling out it’s attack which rarely deviates from either pattern throughout here. Considering the chance this had to really let loose if it did something about having both an intro and outro that would have provided more chances to deviate somewhat, but overall this one still doesn’t come off that bad with the enjoyment on offer here with how it executes the material/

While it does misstep a bit from time-to-time, there’s still a whole lot of enjoyable elements featured here that makes this a wholly worthwhile example of this genre that sounds ripe and ready for fans of the members’ other projects or for those who enjoy this rattling, primitive-sounding death metal variant.