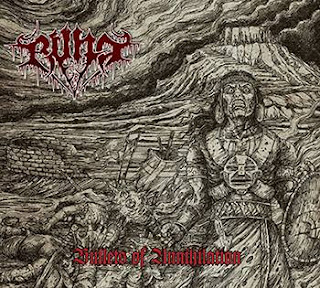 The debut EP from Peruvian death/thrash metal newcomers Runa is a decidedly offers a rather fun and enjoyable take on the old-school scene that showcases their homeland nicely. As with the majority of the South American extreme metal scene, this here is drenched in raw, old-school death metal rhythms that are played rather frantically and intensely in toughened thrash environments which makes the music that much more energetic and lethal which gives off the kind of dirty, thumping vibe with the riff-work a big part of that. Taking stylistically simple-but-engaging riffing and dynamic, thumping rhythms that drives along at great speeds with the occasional drop-off into churning mid-tempo rhythms for select intervals, it makes for enough variety alongside the old-school style to create a wholly impressive attack here. It does run into a rather minor issue here where the material comes off like a rather rudimentary styled South American old-school death metal band for as vicious as it gets in it’s attack there’s little else original about the music throughout here. It runs through a lot of familiar arrangements and patterns that come into play for numerous other groups in this style with the raw working style featuring simplistic rhythms and can make the band blend into that whole scene very easily. As well, the shortness comes into play with this one not even running twenty minutes long with all the tracks barely over three minutes when a little more could’ve made this a lot of fun. It’s still enjoyable enough with these issues though.

On the whole there’s a lot to like here. Opener ‘Lustful Death’ runs through furious drumming and tight thrashing riffing blazing with fiery leads blazing alongside the rather frantic rhythms leading into the sprawling melodic sections toning down the rumbling rhythms before picking them back up leading into the driving final half for an impressive and dynamic opening effort. The title track takes a steady intro with dynamic dexterous drumming settling on a frenetic series of mid-tempo thrashing riffing full of explosive up-tempo patterns and pounding drum-rhythms keeping the steady up-tempo riffing driving along throughout the solo section and carrying the energetic riffing on through the finale for another impressive highlight effort. ‘Whispers of the Past’ slowly builds from a gradual intro into a steady mid-tempo marching gallop with steady rhythms and dexterous drumming flowing through a steady mid-tempo pace with tight riffing leads sweeping through a more energetic series of patterns in the final half for a decent and enjoyable effort. ‘Evil Rites’ features steady drum-work building alongside the sprawling riffing into ravenous drumming and screeching thrash riff-work dive-bombing throughout the frantic, urgent rhythms leading into the solo section and rumbling along to the blasting drumming into the finale for another solid and engaging effort. Finally, ‘Pest’ uses steady pounding drumming and build-up riffing to lead into blasting drum-work and scorching thrash riffing with plenty of energetic rhythms running along throughout the blasting patterns leading through the solo section and keeping the rhythms charging into the final half for an enjoyable lasting impression here.

Though it gives off the hints of its homeland far too often and seems just a touch on the short side, there’s plenty to enjoy about this release and gives this the kind of appeal in the years to come from those that love the South American style of death and/or thrash metal as this seems like a promising band to follow in the years to come.

Does it sound good? Order from here:
https://www.facebook.com/runametal
Posted by slayrrr666 at 6:29 PM