The Beast of Nod - Arrival EP 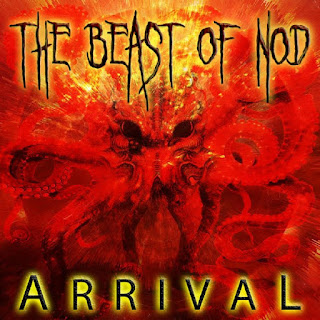 The second EP from Boston death metallers The Beast of Nod offers a wholly enjoyable and somewhat engaging take that comes off highly enjoyable here. Though not inherently technical by any means, the album does seem based very heavily on technical death metal rhythms and challenging riff-work which is run through a deep, heavy series of rhythms that make this sound far more like traditional death metal. This is heavily appealing with the facet of keeping the material churning through various rhythms and tempo-changes that come off in very dynamic terms with that classic churning rhythm running throughout here, and coupled with the tight, blasting drumming it features some very appealing work throughout here. The problem with it all seems to stem from what is common-place throughout most EPs in that it tends to end far quicker than what the listener would like, seeming to stop just when it’s getting good as the effort offers up some absolutely killer tracks at the very end only to suddenly get cut off, and it leaves a somewhat disappointing feel when it could’ve very easily let this kind of solid material run along for a few more tracks. That’s really all that seems to be holding this one back as the group could be absolutely dynamic given a full-length effort.

Overall this was a highly enjoyable and satisfying effort that doesn’t really have much wrong with it beyond the sudden stop of quantity just when it’s getting rather enjoyable, which is the case with most EPs and doesn’t really hinder the fact that this makes for a nice group to keep an eye on for those who enjoy more modern-sounding death outfits.

Does it sound good? Order from here:
http://thebeastofnod.bandcamp.com/album/arrival
Posted by slayrrr666 at 1:22 PM