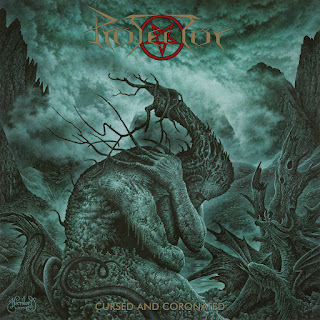 The sixth full-length from legendary German thrashers Protector carries on their legacy incredibly well with another strong effort to prove their reunion wasn’t in vain. Indeed, it seems as though the band never actually left in the first place with their tight, intense thrashing a part of the sound here which brings back the tight, thumping riff-work and stylish, technical punk-laced riffing all augmented by a darkened, black metal aesthetic that’s been at the forefront of the German style of thrash from the get-go. As this  set-up allows for the inclusion of raging speedsters as well as energetic mid-tempo gallops, this makes for a slightly varied attack that still comes off incredibly focused and coherent with each other and gives this an even better feel throughout here as the tracks all logically flow through each other rather than just making a series of different-sounding tracks simply to show off the diversity of their skills. Even when it goes for that route, as in the slightly doom-filled sections or even sprawling melodic interludes there’s still a connection between it all and it makes for an even more engaging listen that all goes together like they did in the band’s heyday.

The first half gives this a strong idea of what’s on display here. The instrumental ‘Intro’ features tribal chanting and rather simplistic beats throughout with a rather driving atmosphere that sets up proper first track ‘Xenophobia’ that blisters through frantic up-tempo riffing and plenty of complex, twisting drumming that works along that savage pounding thrashing framework with plenty of frenzied thrashing along with the urgent pounding rhythms continuing through the final half for an utterly impressive start here. ‘Selfdesdrugtion’ brings along thumping drumming and plenty of swirling riffing with the rumbling bass-lines bringing along the thumping mid-tempo thrashing carrying through the steady paces as the rumbling patterns continue through the solo section into the finale for a fun effort. ‘Crosses in Carelia’ takes stellar mid-tempo thumping with tight mid-tempo riffing taking on sprawling, darkened arrangements with the blasting drumming holding the rhythms for the frantic blasting and urgent thrashing interludes leading through the final half for a spectacular highlight. The title track begins with a swirling melodic riff that turns into a sprawling mid-tempo rhythms with plenty of crushing, heavy doom-styled riffing swirling along to the thumping drumming within the darker atmosphere into the solo section and on through the finale for the weakest track thus far but still has a lot to like about it.‘Six Hours on the Cross’ opens with swarming dive-bombing riffing and rocking drumming holding the blistering rhythms along through the thumping thrash paces with the tight, thumping sections carrying the sweeping riffing along through the charging final half for another solid, enjoyable effort.

The second half here is stronger than the first half in the same style. ‘Base 104’ blasts through utterly intense drumming alongside furious thrashing rhythms with plenty of up-tempo riff-work bringing the darkened atmosphere along into an extended sprawling mid-section before bringing back the blistering thrash rhythms and sweeping riffing in the finale for a stand-out highlight. ‘The Dimholt’ takes a stylish up-tempo series of swirling thrash rhythms charging along through the utterly frantic blistering drumming carrying the ravenous riffing careening through the thumping, full-throttle rhythms carrying on through the solo section and into the final half for back-to-back highlights. ‘To Serve and Protect’ features tight mid-tempo thumping rhythms and a stellar series of pounding drumming that carries the thrashing rhythms along through the extended instrumental interludes carrying the riffing along into fiery solo section and on into the thumping finale for an enjoyable enough effort. ‘Terra Mater’ takes utterly explosive and frenzied drumming along through the explosive thrashing riff-work charging along through the series of thumping thrash rhythms carrying on through the fiery solo section and into the charging final half for another enjoyable effort. Lastly, ‘The Old Boil’ takes a rocking series of mid-tempo drumming and rather exciting thrashing riffing with rather exciting and explosive patterns keeping the stylish rhythms intact through the up-tempo raging throughout the tight finale to end this on a strong note.

It seems the reunion is certainly a worthwhile endeavor now as this is two stellar releases in their catalog now for the group and comes off just like their glory days in the late 80s, making this an essential choice for old-school thrash fanatics, fans of the darker German sound in general or even those looking for a solid, consistent outing in the genre.

Does it sound good? Order from here:
http://www.hrrshop.de/PROTECTOR-Cursed-and-Coronated-CD_1
Posted by slayrrr666 at 9:27 AM