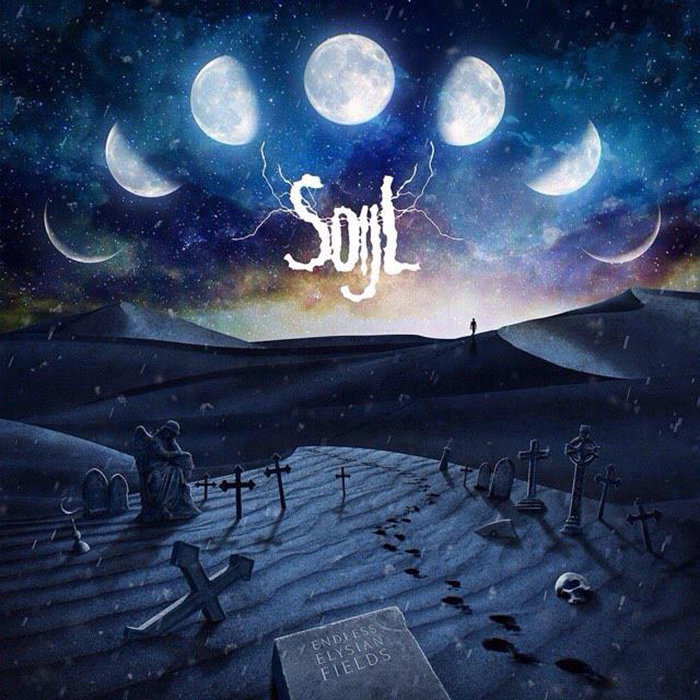 The debut effort from Swedish doom/death project Soijl brings about a rather simplistic and minimalist approach to the genre that’s certainly quite decent enough in it’s approach. Revolving around a simple swirling guitar-and-keyboard heavy framework here, this gives off a series of  lethargic-to-slow paced efforts built around those swirling riffing patterns and haunting melodic keyboard work as the drumming keeping the pace behind it all dominate the album overall to the extent of forsaking everything else. Even with this minimal approach here, there’s a rather intriguing dynamic throughout here in that this type of astrological-styled minimalism manages to come off entirely enjoyable and convincing with the plodding rhythms and making for a much more celestial-flavored aspect on display than would otherwise be the case here. It’s still pretty slow-going and lumbers along at a sluggish pace, though it’s still somewhat energetic at times when it gets going. It’s just not often enough here due to the slower pace featured here which does come off as the album’s main problem here. It does kick in enough to be worthwhile but the epic arrangements come off that way more often than not simply because the album’s dragging the rhythms along than by design.

The first half here does get this going nicely. The opening title track takes a strong lilting riff around plodding paces filled with celestial patterns that work nicely along through the slower rhythms churning along to the simplistic and minimalist environments throughout the final half for a solid opening here. ‘Dying Kinship’ offers swirling riff-work thumping along with the celestial melodic patterns against the minimalist atmosphere that plods along throughout as it changes into a more lively and engaging epic celestial melodies into the finale for another solid effort overall. ‘Swan Song’ features a light series of swirling celestial rhythms and simple drumming as the haunting rhythms throughout here bring along plenty of plodding beats with the swirling riff-work leading into bigger chugging patterns in the final half for a decent enough track. ‘The Formation of a Black Nightsky’ immediately takes the celestial swirling patterns along the sluggish chugging with plenty of tight patterns leading along through the scorching riff-work coming along through the mid-tempo riffing in the final half for an enjoyable and impressive highlight.

The second half isn’t bad either and follows along with the first half rather well. ‘Drifter, Trickster’ takes an extended, long-winded series of swirling riffing and plodding tempos accompanied by the rather tight drumming bringing along the driving riff-work leading the celestial patterns through a series of tight swirling patterns through the finale for a fine if slightly long-winded effort. ‘The Cosmic Cold’ features a strong swirling series of riffing with plodding rhythms augmented by the occasional mid-tempo gallop and urgent chugging riffing off-set against the celestial swirling rhythms throughout the final half for another strong and enjoyable effort. Finally, ‘The Shattering’ takes swirling rhythms and plodding rhythms bringing along the slower pace here with the different engaging melodic patterns keeping the tight, flowing celestial arrangements keeping the  tight patterns and swirling rhythms in line through the finale for an overall decent lasting impression.

For the most part it’s good enough to be enjoyable though it comes off a tad too long at times mostly because of outside factors rather than any kind of natural occurrence which hinders this for all except the most devout doom/death aficionados or those that .enjoy this even, sluggish type of death metal.


Does it sound good? Order from here:
http://soijl.bandcamp.com/releases
Posted by slayrrr666 at 1:25 PM