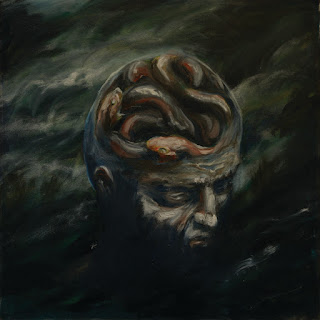 The debut effort from Texas brutal/technical death metal psychos Abhorrent features plenty of enjoyable yet somewhat formulaic takes on the merging of the two styles. With the brutality making the most impactful impression here, from the tight, raging rhythms and furious, swirling rif-work on display here there’s plenty to note here of this style which makes the album seem all the more technically challenging when it manages to make these seem all the more devastating by offering the kind of overwhelming musicianship that works nicely alongside that heavy chugging rhythms. This makes for a rather enjoyable time where it manages to mix them even further with challenging, complex riff-work that offers tight, brutally blistering rhythms alongside the fine drumming carrying that alongside its series of blasting charges that work really well together. There’s one seemingly glaring problem throughout this one as the album does tend to come off a little one-sided with it’s rhythms as the songs tend to blend together into a blur of tight chugging and blasting drum-work for the most part. As it goes along, it being so seemingly married to these bursts of tight rhythms and complex patterns that there’s a real loss of identity as it goes along just becoming an intermingling mess of riffing and blasting drumming that’s competent and challenging but really hard to focus on what’s going on. It’s really the one problem here as the rest of this has a lot to like.

The first half here starts this one off rather well. Instrumental intro ‘Passage’ offers an ambient sound collage amidst a sea of churning riffing leading into proper first track ‘The Elegance of Asymmetry’ featuring plenty of tight chugging riffing, dexterous drum-blasts and churning patterns keeping the unrelenting pace full of complex tempo changes and rhythm switches as the brutal blasting drumming brings the tempo changes into the final half for a strong opener. ‘Ifrit’ uses swirling technical patterns and charging drumming full of challenging arrangements utilizing tight, frantic patterns alongside the technically-challenging riffing charging into the swirling arrangements and brutal drum-work in the finale for another strong effort. ‘Reward System Malfunction’ utilizes churning rhythms and plenty of tight, blasting drumming that takes the challenging, complex patterns alongside the mid-tempo riff-work churning along through the series of swarming, churning rhythms blasting along through the final half for the album’s clear highlight offering. The mid-album instrumental breather ‘Clarity of Will’ brings deep, thunderous bass-lines and classical piano notes that offer a calming, relaxing air.

The second half is slightly below the first half but is still enjoyable enough. Leading from the previous track, ‘A Lightness of Mind’ features tight, blaring rhythms and plenty of technical swirling rhythms charging along throughout the plodding mid-tempo paces with the charging rhythms and blaring bass-lines holding the complex rhythms along into the tight finale for an enjoyable effort. ‘Ill-Conceived’ immediately blasts through tight patterns and chugging rhythms with plenty of frantic and complex arrangements making for a rather charging series of riffing patterns leading into the swarming solo section and chugging along into the complex final half for another solid and enjoyable effort. ‘Eternal Recurrence’ takes frantic mid-tempo chugging and complex riffing alongside the rattling drum-work utilizing plenty of tight, raging rhythms throughout the sprawling tempos charging along the mid-section with the aimless chugging and frantic drumming blasting along in the finale for a mostly bland effort overall. ‘Larva’ uses a light, extended acoustic intro before turning into tight, complex riff-work and dexterous, blistering drum-blasts taking the thumping rhythms along through the sprawling mid-tempo rhythms featuring the challenging riffing turning back into blistering drum-work for the final half into a stylish and enjoyable effort. Album-closer ‘Parasite’ takes a steady, sprawling rhythms and complex, blasting drum-work that soon settles into frantic, unrelenting riff-work alongside the explosive, challenging rhythms leading into the churning rhythms along throughout the steady tribal patterns leading through the finale for a solid lasting impression.

Though it can run into problems with itself later on where it takes way too much similarity with the different rhythms here, this is still an overall enjoyable amount of brutality and technicality that manages to make this one a band to watch for fans of either style or fans of extreme metal in general.

Does it sound good? Order from here:
https://willowtip.bandcamp.com/album/intransigence
Posted by slayrrr666 at 1:25 PM