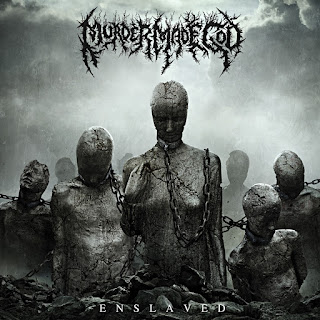 The second full-length from Greek brutal/technical death metallers Murder Made God continue on with another stand-out release offering plenty of enjoyable extreme metal. Putting on a clinic with insanely tight, challenging riff-work that drops through numerous tempo changes, rhythm deviations and even wholesale riff-qualities that whip and dive-bomb constantly here, it brings out a technically-complex assortment of attack here that gives this a strong variety on top of showcasing utterly pummeling work throughout here. Offering the chance to go for mid-tempo crushers loaded with chugging grooves and heavy-hitting breakdowns or searing blasts loaded with driving stuttering chords and mechanical drum-patterns full of blistering speed, this one tends to run the full gamut of extremity in the genre all the while utilizing utterly complex, challenging arrangements that run throughout the tracks here. The brutality of this kind of tight, raging material gives it an extra dose of extremity alongside all the technicality and varied dynamics featured within here, and overall there’s just so much to like about the attack here going with the vice-tight rhythms featured. Though this one does get a little caught up in the sterile-production job that makes everything sound too mechanical rather than natural, especially the drumming that’s too obviously triggered, it’s not that big of an issue to hold this down.

The first half here gives this a strong idea of what’s on display here. Opener ‘Victims’ features utterly schizophrenic riffing with plenty of blistering drumming weaving throughout strong, mechanical patterns as the tight, complex rhythms charge along at ferocious paces changing rhythms throughout into the final half for an utterly explosive opening effort. The title track features blazing mechanical drum-work and continuous sweeping riff-work carrying on through the tight, frantic patterns here with the stuttering rhythms allowing for a series of breathers between the rampaging chaotic riffing through the finale for another fun effort. ‘The Titan, The Fighter and The Thief’ features utterly blistering drumming and swirling complex rhythms throughout the stuttering, angular patterns throughout with the brutal cyclone of razor-wire technically-complex riffing taking the mechanical stuttering arrangements into the final half for a stellar beating overall. ‘A Morbid Institution’ uses complex rhythms and technically-challenging rhythms stuttering through urgent patterns rumbling along through the urgent grooves and blistering drumming carrying on through the swarming riffing along throughout the complex, raging finale for another overall strong effort. ‘Depression’ utilizes thumping rhythms and mid-tempo riffin swirling through complex patterns chugging along with plenty of challenging leads blistering through the stuttering arrangements chugging through the breakdowns piled on top of each other in the final half for a solid and serviceable effort.

The second half here is almost exactly like the first half here. ‘Assassines!’ blasts through frantic riffing and pummeling drumming with tight, mechanical waves throughout the tight series of challenging, complex stuttering grooves leading along the blasting drum-work carrying the swirling, stuttering riffing into the finale for a strong, serviceable track. ‘The Irony of Faith’ takes thumping grooves with stuttering technical riff-work grinding along through explosive tempo changes featuring plenty of complex rolling patterns with swirling complex riffing alongside the mechanical blasting drumming blistering through the chaotic final half for another strong highlight. ‘Subject666’ uses blistering drumming and charging technical riff-work into a stellar up-tempo pace filled with utterly pummeling rhythms full of complex, twisting riffs and mechanical drumming stuttering through the tight chugging grooves in the frantic finale for an enjoyable effort. ‘Urban Warfare’ features rumbling rhythms and plenty of tight, thumping rhythms with plenty of sprawling technical rhythms with a stuttering mid-tempo groove chugging along to the blasting drumming winding through the complex sweeping riffing surging through the final half for another solid effort. Finally, album-closer ‘Involuntary Servitude’ blasts through utterly intense rhythms with plenty of tight, frantic patterns and tight, thunderous drumming filled with mechanical complex blasts as the raging riffing keeps the tight rumbling breakdowns in line through charging, complex patterns in the finale for a solid, enjoyable finish.

An overall impressive and highly engaging effort here, there’s enough to work here that ends up giving this one a varied, dynamic attack that gives this plenty to like which makes this a solid choice for those who appreciate this destructive kind of death metal or fans of brutal, complex music that gets featured here.