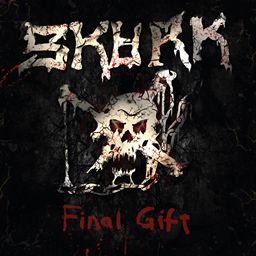 The debut EP from Icelandic thrashers Skurk offers up some intriguing moments along the way but isn’t all that impressive for what it could’ve been. Considering the band has been active since the early 90s, the basic fringe of Bay-Area riffing is predominant throughout here with the gruffer sheen usually afforded to the European scene, it comes off as a rather faithful tribute that at times doesn’t really offer too much variety and keeps things pretty one-note. There’s a lot to like about it when the band really thrashes out and lets themselves go which lets their churning riff-work, dexterous drumming and hard-hitting approach generate some rousing, energetic thrash but the fact that there’s some sluggish work here does hinder this part somewhat. It’s being tied up in these rhythms where there’s mid-tempo churning rhythms running throughout here that it tends to come off rather low-key and plodding without much going for it, and the fact that they’ve been around this long is what makes that so troubling as it seems to be a case where they should’ve known better to leave these sluggish patterns on display here. Still, this one doesn’t feel too disappointing with the good tracks still popping up here.

Overall this one wasn’t all that bad as the tracks were quite fun. Opener ‘Ruler’ features an extended ambient intro that turns into a groovy mid-tempo swirling riff-work with pounding rhythms carrying the bulging energetic riffing alongside the dexterous and pounding drum-work as the clanging grooves continue on through the finale for an enjoyable opening effort. The title track offers a melodic acoustic intro slowly turning into mid-paced churning riff-work that keeps the steady mid-tempo pace through the series of swirling riff-work with a rousing energetic solo section full of dynamic patterns continuing on through the final half for another enjoyable effort. The epic ‘Darkness’ uses a series of thumping mid-tempo grooves and plenty of plodding rhythms from the stuttering riff-work alongside the tight drumming as the tempo shifts into a slightly more energetic affair with swirling melodic leads throughout the solo section and leading through the plodding finale for a decent if overlong effort. ‘Dead Again’ uses a thumping series of mid-tempo chugs with a strong twist into raging riff-work and utterly frantic drumming that keeps the tight, intensely wound rhythms carrying along through the raging tempos continuing along through the solo section and into the final half for a clear-cut highlight offering. ‘Chaindead’ features mid-tempo churning riff-work and plodding rhythms with sluggish drumming and rather simple rhythms keeping the lethargic and dull pace completely held back as the solo section attempts to keep the energy going through the plodding finale for a wholly bland worthless track. Lastly, album-closer ‘My Friend, the End’ slowly fades into a thumping series of tight drumming and swirling leads that turns into rabid, thumping thrashing leads with pounding drumming carrying along through the scorching solo section and continuing through into the raging final half for a fine lasting impression overall.

Though it doesn’t really overwhelm the way it should’ve for a group that’s supposedly been around as long as they have, yet there’s still enough positive elements on display that it remains at the very least listenable for the most devout and hardcore thrash enthusiasts who will enjoy this the most.

Does it sound good? Order from here:
http://skurkmetal.bandcamp.com/releases
Posted by slayrrr666 at 1:08 PM