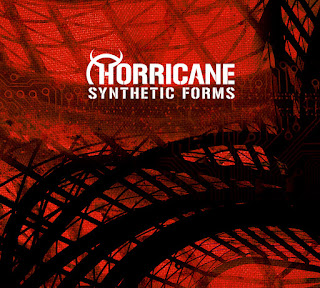 The new EP from Estonian death metallers Horricane is a slightly disappointing effort that doesn’t really seem to serve much of a purpose for it’s release. Though obviously continuing on with their style of incorporating mid-tempo polyrhythmic-centered riff-work and atonal pattern changes with the tight drumming alongside the influx of industrial-ish keyboards, this certainly maintains a consistent sound and feel here with their previous work that’s displayed across a lot fewer tracks than usual, which is where this one somewhat falls apart. The fact that this one only has those few select tracks of original work here considering the three original songs and the remix show up here leaves this one with so few chances to really get to shine that it really loses a lot of it’s appeal trapped in the guise of unimportance that makes this seem like a preview of an upcoming album more than a selection of must-hear music from the group. That said, nothing about the final track on here, a useless remix of the title track where uses industrial samples and cuts the vocal tracks over it all should’ve been released as this is not only bland, lifeless and appaling to think it should’ve been heard but the market is completely unclear as to who would’ve requested that to be done to the band in the first place and really makes the whole thing a colossal waste of time and space. Otherwise this isn’t bad as it’s just more of the same played with the same energy and conviction.

For the most part the music here isn’t too much of a problem. The opening title track slowly moves through a churning series of stylish droning riffing with pounding drumming and thunderous mid-tempo rhythms stuttering along to the surging riffing and sprawling patterns coming along into the plodding industrial waves running along through the final half for a decidedly-decent offering. ‘Starblind’ takes a steady, thumping mid-tempo polyrhythmic riffing style and plodding tempos with djent-flavored chugging holding the simplistic and one-dimensional pace throughout with the haunting keyboards slugging through the bland rhythms into the finale for another enjoyable take on this style. ‘Leper Nation’ takes stylish mid-tempo chugging alongside tight drumming pounding along at a steady, mid-tempo pace churning with plenty of thumping rhythms carrying the energetic rhythms along through the polyrhythmic leads leading to a bit of energetic riffing running along through the frantic final half for the album’s best track overall. Lastly, the Kaspar Torn remix of the title track focuses on industrial sounds over plodding rhythms as the vocal lines get carried over from the previous track while the clashing, atonal rhythms and ugly industrial sounds continue on through the finale for an utterly atrocious effort that has no business being here as it leads this with an utterly ugly lasting impression.

Though there’s one major misstep here in the way this one ends up, it’s still a fun enough example of this style that there’s a lot to like here for both fans of this droning style of death metal or themselves so long as the album’s flaws are taken into extreme consideration before listening.


Does it sound good? Order from here:
http://horricane.bandcamp.com/album/synthetic-forms
Posted by slayrrr666 at 12:43 PM