The King Must Die - Murder All Doubt 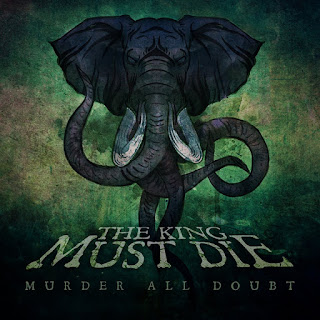 Artist: The King Must Die
Release Title: Murder All Doubt
Year: 2016
Label: Self-Released/Independent
Genre: Thrash Metal
Tracklisting:
1. Well Being
2. In Blood
3. Murder All Doubt
4. A New Hell You Embark
5. Choose Them Wisely
6. Reflection Spills
7. Broken
8. The Only Way We Bleed
9. For This We Live
10. These Later Years

The second album from California thrashers The King Must Die is a stylistically similar and ultimately enjoyable effort that follows the same route as the predecessor. This is still based heavily on fiery, churning riff-work and a stylish Bay Area centerpiece when it comes to the rhythms, and there’s still a decidedly enjoyable set-up here that does at the least come off as enjoyable about what it really wants to do here in regards to it’s energetic rhythms running through it’s tracks. As well, this fiery rhythm-work is given  a solid counterpoint when it settles for mid-tempo swirling rhythms and choppy, pounding drumming, all coming together into a cohesive showcase. Again, being so similar in style and execution is a minor problem as there’s a sense here that the music is enjoyable and engaging without really going for the knockout blow that would be required here to let the music get that fast, intense quality that’s seemingly based upon the riffing and pounding rhythms featured. The music here seems to be stuck in a second-gear compared to what it really seems capable of, and there’s enough moments of teasing that possibility here that it seems entirely possible that’s the case here where it could’ve let loose with those up-tempo patterns that are seemingly just lurking just beneath the surface of the songs. This does fix the one minor issue from the first one as the over-bloated song-length is fixed with a more manageable track-order which gives it a slight nod over the debut but the same issues cropping up is a little troubling.

The second half being set-up much like the first half makes it enjoyable as well. ‘Reflection Spills’ slowly works through a slow-building intro into a steady, mid-tempo series of swirling riffing and plodding drumming keeping the thumping, plodding paces along throughout the churning mid-tempo rhythms continuing along through the steady, swirling riffing of the finale for an overlong and rather unimpressive effort. ‘Broken’ features plenty of thumping mid-tempo series of riffing alongside rather energetic and pounding drum-work keeping the thumping mid-tempo paces along throughout the pounding mid-tempo patterns and churning riff-work leading through the thumping solo section and on through the final half for another strong, engaging track. ‘The Only Way We Bleed’ utilizes thumping patterns and plenty of swirling riff-work along throughout a stuttering mid-tempo charge that keeps the strong riffing along into the strong and charging series of churning riffing into the steady mid-tempo rhythms in the  charging finale for another strong effort. ‘For This We Live’ utilizes urgent thumping riffing and pounding dexterous drumming with plenty of tight, urgent rhythms keeping rather frantic rhythms along into the strong series of sprawling patterns into the solo section and keeping the up-tempo thrashing rhythms into the final half for a decent enough effort. Finally, album-closer ‘These Later Years’ features a series of thumping drumming and steady, mid-tempo drumming that keeps the steady rhythms along into a rousing series of up-tempo drumming and plenty of tight riffing keeping the rousing energy through the up-tempo solo section and along through the finale for another strong lasting impression.

Much like with their previous album, this one tends to run along through much the same work and doesn’t really offer up much of any kind of stylistic or dramatic improvements which leaves this one much the same as it’s predecessor in being more for devout thrash enthusiasts for the most part.

Does it sound good? Order from here:
https://tkmdband.bandcamp.com/releases
Posted by slayrrr666 at 10:03 AM