Sudden Death (It) - Monolith of Sorrow 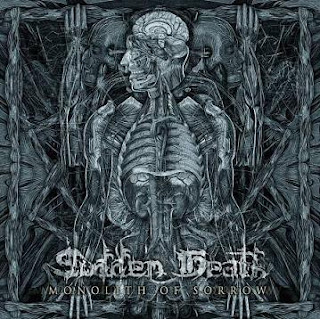 The third full-length from Italian brutal death metallers Sudden Death shows that decade-long lay-off was for the best with an utterly explosive, dynamic offering. Though initially appearing from the onset like any normal brutal death metal offering, there’s a few slight small tweaks to the formula that stand-out here which starts with the riff-work. Starting with the frantic, tight and blistering death metal rhythms, there’s plenty of furious and unrelenting tempos ranging along throughout the tracks here as this one tends to really favor the high-speed formula here and making the tracks even more impressive. Being able to utilize a scattered few series of breakdowns as well as slams and managing to deftly maneuver along a few other pacing and tempo changes to further complete the picture, this one features a slew of high-energy yet still unrelentingly brutal guitar-work that makes for a great time. Perhaps making it even more impressive is that the deep, heavy production job smeared across the tracks keeps it all sounding truly massive and pulverizing while still allowing for the dynamics to be truly apparent whenever they occur. Letting the pulverizing drumming and twangy bass-lines get prominence throughout here as well is another truly strong factor in here and manages to truly pound out a series of impressive dynamic rhythms here. It does tend to rely too much on sampled movie intros for many of the songs, but overall it’s a minor quibble against this one.

The first half here sets the stage for what’s to come incredibly well. The instrumental ‘Intro - A New Strategy of Terror’ offers a sampled movie scene before turning into a furious mix of tight, brutal riffing and pounding leads setting the proper first track ‘Blood Wings’ featuring plenty of tight, crunchy rhythms and pounding drumming full of scorching leads and feverish riffing bringing along plenty of blistering rhythms and frantic drumming diving throughout the final half for a wholly impressive offering.  The utterly blistering ‘Cancer of a World Condemned to Die’ blasts through utterly blistering full-throttle riffing thrashing along to pounding drumming and frantic riffing keeping the furious rhythms along through the breakdowns and slams into the tightly-woven riffing in the thrashing finale for a raging highlight effort. The title track takes a gradual build-up to a tight, chugging series of breakdowns before letting the mid-tempo riffing through the main rhythms with the change-over into a strong series of dexterous drumming and tight, swirling riffing chugging along through the tight, frantic finale for another solid effort. ‘Toxic Devourment’ features a sampled intro before turning into a tight, feverish burst of swirling, technical rhythms and dexterous drumming featuring plenty of heavy slams and deep, heavy riff-work throughout the tight breakdowns with the solo section leading the urgent rhythms into the final half for another solid highlight.

The second half here is much like the first half overall. ‘Inhuman Lycanthropic Lust’ uses an extended sampled intro before turning into a series of tight, frantic mid-tempo riffing alongside swirling slams and dexterous drumming that settles into unrelenting blasting drumming and ferocious rhythms with plenty of tight riffing into the sol section through the finale for another wholly impressive highlight. ‘Vomit’ immediately blasts through tight, mid-tempo riffing and plenty of pounding drumming with the change-over into fevered breakdowns and slams hitting through the deep, heavy riffing and blasting drumming that leads through the solo section and carrying the urgent riff-work through the twisting final half for an enjoyable and frantic effort. ‘Reanimator’ uses the extended movie-sample intro to turn into a series of ferocious, swirling riffing and blasting drumming with intense rhythms and tight, blistering drumming carrying the urgent patterns alongside the battering drum-work keeping the intensity raging into the finale for a rather enjoyable effort. Lastly, album-closer ‘Dressed by Flesh to Cover the Darkness’ features brutal, unrelenting swirling riff-work and pounding, dexterous drumming through explosive, fraying tempos that soon settles on tight breakdowns before returning to the frantic and explosive up-tempo chugging featuring plenty of furious riffing throughout the final half into an impressive lasting impression.

While this one comes complete with one utterly inconsequential but still noticeable flaw that keeps this down ever so slightly from where it could’ve been, this is still undoubtedly one of the top examples of the style in the whole scene making this an indisputable addition to any fanatic of brutal death or extreme metal in general.


Does it sound good? Order from here:
https://suddendeath666.bandcamp.com/album/monolith-of-sorrow
Posted by slayrrr666 at 1:23 PM