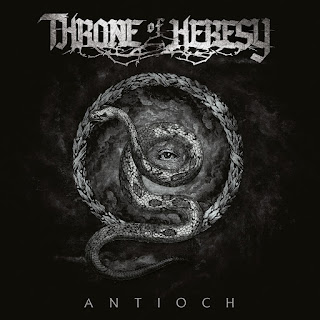 The second album from Swedish death metallers Throne of Heresy offers a rather solid enough outing here of solid and dependable death metal even there’s nothing all that impressive about it. Basing itself mostly around the churning riff-work that allows for some rather heavy, mid-tempo riffing featured that drives in some pounding rhythms that can change tempos rather nicely.  With plenty of opportunities for the effort to bring in scores of melodic flurries running through the songs that mix rather nicely with the intensity of the remaining rhythms which leaves this with a far darker concept of melodic death metal than usually offered with the focus on driving rhythms accented by melodic leads rather than just lighter rhythms and easily-accessible melodies which are scattered throughout in occasional spurts. While this sets up an overall enjoyable aspect to be found here within their sound, the fact that the music isn’t all that dynamic and overall varied tends to run the greatest damage against this one by keeping the music overall straightforward and rather one-dimensional. With a few minor exceptions, there’s little change-up here in what the music has on display being just a straightforward and unchanging work that keeps the dynamic death metal rhythms on track with the occasional bits of melodic tendencies to make for a rather engaging but forgettable affair without much to bring it back on repeat listens. This is really the biggest mark against the album otherwise.

The second half is slightly below the first but still has a lot to like throughout here. ‘Black Gates of Antioch’ uses a steady intro with plodding rhythms with plenty of pounding double-bass blasts firing through the up-tempo second half with fiery energetic riff-work and scorching melodies dropping for a series of discordant banging leading into the solo section and through the finale for a decidedly enjoyable enough offering. ‘Blood Sacrifice’ features sprawling rhythms slowly working into a plodding pace equipped with sluggish rhythms turning into a solid mid-tempo pace with a more intense series of riff-work against the sparkling swirling rhythms of the solo section on through the charging final half for a weak if still enjoyable effort. ‘Phosphorus’ features utterly blistering drumming running through frantic, intense patterns with plenty of charging riff-work keeping the intensity level up throughout the frantic, intense patterns full of furious rhythms with melodic leads through the intense finale for another strong highlight. ‘Souls for the Sepulchre’ uses a fade-in intro which turns into a stylish mid-tempo march with charging riffing and pounding drumming into a straightforward series of churning riff-work with the sprawling melodic leads of the solo section leading into the blistering fury of the final half for a decent enough effort. Lastly, the album-closer ‘Where Bleak Spirits Pass’ features a lilting guitar intro into a sprawling series of mid-tempo swirling riff-work with lilting melodies featured throughout the plodding paces with the main driving rhythm full of lethargic paces leading into the sprawling final half for a decidedly low-key finish.

Despite possessing a few minor sluggish areas throughout here that could’ve easily been fixed without much difficulty, the fact that there’s still quite a large amount of positives here makes this a nice change for fans looking for melodic death without veering too far from their traditional roots or just fans of driving straightforward death metal in general.

Does it sound good? Order from here:
http://throneofheresy.bandcamp.com/
Posted by slayrrr666 at 2:42 PM