Murder Spree - Time to Rise Up 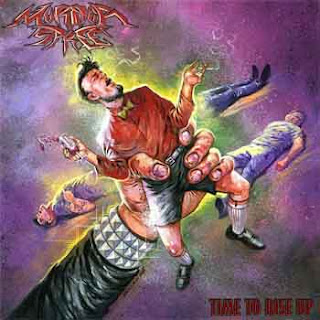 The debut full-length from Italian thrashers Murder Spree gets this going with a lot of rather intriguing elements to get this one going nicely. Essentially taking the crossover route in terms of offering straightforward, to-the-point riffing full of ravenous and intense patterns, there’s a wholly enjoyable and intriguing nature here to the tight rhythms found on display throughout here manages to bring out that form of work throughout here. From the frantic riffing and the dynamic,blistering full-throttle paces found here give that series of riffing all the more impressive attributes here with giving this the kind of reckless high-speed attitude needed here as well which really helps this one considerably make for a truly exciting and enjoyable that produces a competent and enjoyable enough attack here. While that makes this quite fun, in the end it also ends up making the album so tight and condensed that there’s a sense of brevity here where the music doesn’t tend to sit well as a full-length effort and comes off feeling quite a bit like a shorter release than it really is. The razor-wire riffing also leads into this factor somewhat by keeping the songs so brief and dense that it really doesn’t offer up the chance of really getting to the more sprawling rhythms, though overall it doesn’t tend to affect the songs as much as the other issue.

The first half here is quite a solid start to this one. Intro ‘W.O.T./Fading Away’ uses a sampled movie speech that turns into a tight, raging full-throttle series of blasting rhythms and pounding drumming full of tight riff-work thumping along with the frantic rhythms full of up-tempo riffing keeping this going through the charging final half for an exciting opener.‘No Rest for the Wicked’ features tight, twisted riff-work and thumping mid-tempo speed metal rhythms driving along the frantic, energetic riffing with plenty of non-stop driving patterns into the solo section and driving through the frantic finale for an enjoyable shorter burst of thrash. ‘Six-Pack Tsunami Attack’ blasts through intense rhythms and plenty of pounding drumming carrying the frantic rhythms along through the ravenous paces with plenty of vicious riffing and pounding drumming taking the steady, speed-driven rhythms through the solo section final half for a molten, blistering thrash highlight. ‘Cerveza on the Beach’ uses a rocking series of twisting razor-wire riffing with a steady mid-tempo groove with plenty of tight, fiery riffing bringing the swirling rhythms along quite well with the intensity brought back into the solo section finale for another strong effort.

The second half is another overall strong-enough part of the album. ‘A New Hope’ features strong swirling riff-work and tight rhythms blasting through the tight frantic rhythms blasting the utterly relentless drumming blasts through the strong series of stuttering, up-tempo patterns leading into the final half for an enjoyable highlight offering. ‘Hipster vs THRASHER’ uses a buzzing bass-line intro with a steady stream of swirling crossover riff-work blazing through the frantic paces with the furious volley of intense riffing keeping the high-flying pace on-track throughout the charging final half for a blistering effort overall. ‘False’ takes strong build-up riff-work and a decidedly strong series of thrashing rhythms with plenty of furious drumming blasting throughout the strong up-tempo paces keeping the rumbling frantic paces throughout into the ravenous finale for an overall quite enjoyable effort. Lastly, the title track features strong immediate riff-work with plenty of tight mid-tempo rhythms that soon explode into frantic blasting with a strong, steady stream of twisting riffing alongside the tight drumming carrying the blistering rhythms through the solo section and into the final half for an enjoyable ending note here.

For the most part this one was enjoyable enough with only the heightened sense of brevity holding it back as there’s still more than enough positives here to make this one worthwhile for fans of the more vicious and intense thrash acts out in the scene or even those tired of yet another retro/throwback act.