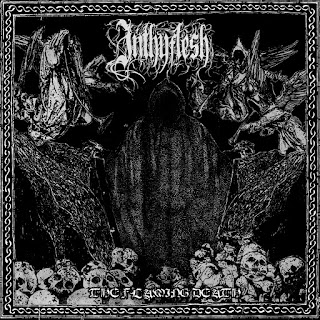 Furthering the prolific local scene, Portuguese black metallers Inthyflesh have been thriving during their sixteen-year career which has been assembling a vast and ascendant discography, showcasing a simultaneous devotion to the black metal ethos and a continuous excursion into deeper spiritual and unfathomable concepts. Now five years of work and sweat has resulted in this monumental, massive double-album released September 9, 2016 as a co-release between Altare Productions and Blackseed Productions.

When this one is on, there’s so much to readily like about this one that it’s basic approach which is a gravelly, raw old-school tone to the riffing that’s flowing throughout the whole album, generating the spiraling tremolo-picked style that’s wholly indicative of the second-wave of Norwegian acts. This is mostly kept in a frantic, up-tempo series of tempos where the album’s frantic assault gets the most play and lets the album rattle along quite well with a series of utterly blasting rhythms that carry it through a wholly chaotic sensibility while being able to augment these sections with grandiose, majestic sprawling sections as well. These are a slightly slower, more majestic series of rhythms that take slow, plodding tempos and warmer melodies to the forefront against the raging inferno elsewhere here, and this strong dichotomy between the two offers this with plenty of superb, standout moments. Still, for all the good this album generates, it’s still nearly impossible to get over the fact that there’s just so much material here that it’s positively exhausting to get through it all. Not only is there nearly twenty tracks of music that combines into a nearly full two-hours of music, but the length of so many of the tracks reaching well over six-plus minutes is what really makes this not only a chore to listen to but a draining and boring experience as well. This one truly becomes a challenge to get all the way through with so much of the tracks here taking up so much time and space that it’s far easier to cut, hack and trim this thing down especially with it being as strong in execution as it is already. While this is a significant and bounding hurdle to get through, there’s still a lot to like here.

While this is unquestionably an exhaustive release for the most part as the endless running order and overlong tracks make this a challenge to get through in one sitting, the fact that the album’s principles make up such a powerful and devastating release that it should make a mention to all fans of the rawer, old-school scene or the curious looking to see what this is about.

Does it sound good? Order it from here:
http://blackseedprod.bandcamp.com/album/the-flaming-death
Posted by slayrrr666 at 12:47 PM