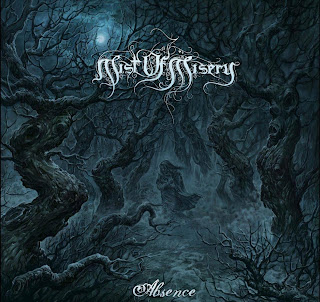 Following the success of their previous release, Swedish symphonic black metallers Mist of Misery have gotten quite proficient at their mixing of depressive, melancholic and ambient atmospheres in symphonic black metal soundscapes. With five years spent honing and refining this into a fine art, the group prepares its second full-length and first release with vocals on August 31, 2016 on Black Lion Productions.

Considering its origins, this here is a rather impressive and dynamic offering that readily combines the band's penchant for weaving depressive atmospherics into a grandiose, majestic bombast as there’s a great contrast between these styles. With their seemingly disparate mixing of depressive black metal with symphonic elements, it leaves this with a highly appealing soundscape of cold, minimalist swirling riff-work that sounds quite downbeat and depressive rather than large and glorious which is what’s usually the case in the genre. That atmospheric charge here into more mournful, melancholic rhythms against the dynamic, dexterous drumming and cold, swirling tremolo riffing is what gives this one quite an impressive and wholly enjoyable ambient soundscape that manages to feature enough overt blasting and charging cinematic keyboards to sound symphonic in cases, yet the overwhelming downbeat and depressive nature takes precedence here to create a much more dynamic restrained scale. In this case, the only thing that really doesn’t offer up much interest overall is the short instrumentals which are spread out quite often within the music and are used way too much for such a short album which does upset the running time pretty heavily stopping to place another interlude. Still, this isn’t all that bad of a problem and doesn’t stop the rest of the music from being enjoyable.

Despite the album’s few minor upsets where it’s not as fully-flowing as it really should’ve been, there’s still so much to enjoy with their explosive and oftentimes dynamic mixture of depressive melodies and symphonic black metal that it really appeals to work well for crowds of both styles as well as those looking for something beyond the realm of normal symphonic black metal.

Does it sound good? Order it from here:
http://mistofmiseryblacklion.bandcamp.com/album/absence
Posted by slayrrr666 at 3:03 PM