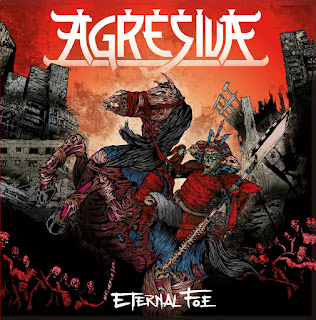 Formed in the summer of 2008, Spanish thrashers Agresiva quickly set out to put their Bay Area influences to the forefront as the groups’ first demo showcased their fiery brand of old-school inspired thrash. Being the first release with new drummer Chus Maestro after replacing original member Axel Ramirez as well as being the last release with founding guitarist Eduardo Chamón, their full-length debut was originally independently released March 12, 2012 before being reissued February 19th, 2016 on Minotauro Records.

Considering their influences, this one is pretty obviously a ripping old-school thrash band influenced mightily by the Bay-Area tactics and rule-book. From the tight, crunchy and explosive riffing it offers a rather enjoyable display of old-school thrash that manages to run the gamut from the dynamic up-tempo gallops to the moody mid-tempo style that slows down the rhythms to act as a melodic buffer, the majority of the album carries the rather explosive and charging feel of the late-80s thrash scene. With the dominant usage of the galloping rhythms and tempos here this one really gets a strong sense of charging atmosphere present here that manages to get this one going for some pretty intense and aggressive rhythms with only a few occasional melodic breaks to change things over with this one really generating the melodic breaks throughout here that keeps the rhythms from exploding the way the typical thrash acts do. This ends up creating a more melodic but still up-tempo and intense variant on the old-school style which is quite an enjoyable style which isn’t all that different or dynamic from numerous other bands in this style. It’s quite identical to many others out there in the scene which manages to make this feel quite a bit down from that particular style. While it’s still fun, this here is what ends up holding this one back.

Despite some minor problems with this one, there’s still more than enough to really like here that manages to make for quite a enjoyable and mostly blazing old-school influenced attack that makes this one an fine enough curiosity piece for the most devout revivalist thrash-aficionados or fans of latin-country metal acts.