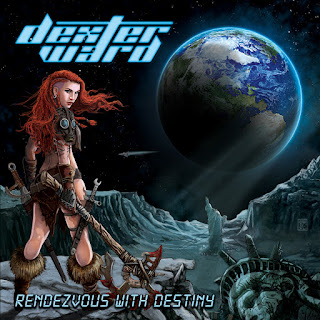 Continuing on from their past success, Greek metallers Dexter Ward haven’t let their rather impressive debut keep them from furthering and honing their craft as they followed it up with a ravenous live-schedule with plenty of shows to keep their edge. Now five long years from their previous album, this second full-length effort is released April 29, 2016 on No Remorse Records.

Much like the bands’ past works, the main focus here is on creating a heavy, epic tone with their arrangements and is quite apparent in this one. Lead by a majestic, sprawling series of rhythms that come about through somewhat plodding tempos that are laced with huge, grand patterns and triumphant melodies intertwined together that leaves this one feeling quite large and powerful. There’s not a whole lot of speed here as the band’s fastest tracks are a steady mid-tempo gallop, yet there’s a more prominent feel here in taking these hard-hitting trad elements and laying on grand power metal melodies over it all which is where this one scores nicely as those are among the best parts of the album. That atmosphere here where this takes that big approach with the galloping paces works this one quite nicely as it’s heavy rhythms and melody-driven riff-work generate the main elements at play here. While that’s the case, the album does have some minor problems here where it’s mostly based around such a bleary pace that the album doesn’t really get much fire or energy out of it’s tracks, leaving them somewhat bland and middling where it’s one long mid-tempo track after another. There’s not a great deal of variety either, as it’s similar tempos and plodding paces can drag this one out quite a bit longer than what is really feels like, and is definitely a case where the band could’ve interjected some faster paces to liven things up, though it’s altogether not that terrible.

Though it has some problems in terms of pacing and generally igniting the kind of fire and emotion typically associated with the genre, there’s enough here in terms of generally enjoyable atmospheric work that this is a solid if not entirely worthwhile choice for fans of the majestic, epic side of trad/power metal only.

Does it sound good? Order it from here:
https://dexterward.bandcamp.com/album/rendezvous-with-destiny-2
Posted by slayrrr666 at 12:27 PM