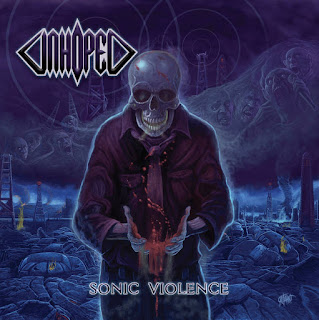 After years of struggle to break through, Finnish thrashers Unhoped have finally found their mark with a strong combination of fast and heavy-handed thrash metal with plenty of death metal elements brought to the forefront. Taking a three-year gap in between releases with an EP in the middle, the group’s third full-length effort was released March 3, 2016 on EBM Records.

For the most part here, this one tends to go for the more blistering and frantic thrashing that carries with it a sense of violent intensity that’s highly impressive with the rattling riffing making for quite a fun time. They manage to inject a reckless bombast to the material as the furious rhythms are generally tight, frantic and built around the rattling fury of the thrashing blasts present here to create the frenzied approach typical of this style while also being mindful of adding in plenty of more vicious elements with the furious death metal charging chugging being added as well. This adds another layer to the bands’ approach with a reckless and energetic intensity added to their riff-work by offering a blistering up-tempo counterpoint to the traditional thrashing offered here, and that gives this plenty of swirling rhythms interplaying with each other as this generates the band’s trademark fury here even on tracks that take their time to build into the thrashing. This really doesn’t leave the album much breathing room in it’s rhythms at all, which works out incredibly well here with it managing to offer up it’s best positive as well as greatest negative in the fact that there’s just not much variety at all in the tracks which tend to come off as vicious, violent slabs of thrash without much exception here and is generally a difference of minute details in how they all differ from each other. This can make the album appear somewhat one-note and rather oblivious to itself as it just thrashes away with reckless abandon as to what’s on offer here, but overall there’s not much else really wrong here.

Featuring a ton of utterly fun vicious thrashing that doesn’t really slow down all that much which becomes it’s greatest virtue as well as biggest stumbling block, overall the fact that this one is such a blistering, brutal bash of thrash makes this one of the more appealing prospects for those into that style as well as any thrash/death fanatic.

Does it sound good? Order it from here:
http://ebmrecords.bandcamp.com/album/sonic-violence
Posted by slayrrr666 at 6:45 PM