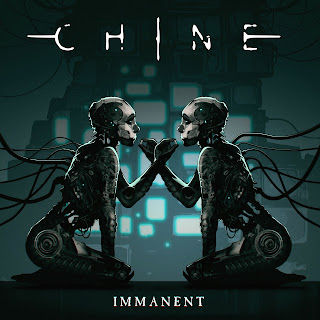 Furthering their own independent voice, Swedish melodic death metallers Chine continue to make inroads in the scene since their change-over into a technical and aggressive blend enriched with dark harmonies that were introduced into their sound. With the group now joined by bassist Tommy Erichson, guitar virtuoso Jokke Petterson and extreme singer Ola Svensson, their third full-length effort was independently released July 1, 2016.

Once this one gets going, this one tends to run through the more melodic, mid-tempo series of styles associated with the melodic death metal genre which manages to incorporate the album’s penchant for stuttering, chug-heavy metalcore-influenced riffing quite dominantly throughout here. There’s a heavy incorporation of thumping heavy breakdowns and even industrial-flavored keyboards added into that riffing style which is infused with those chugging riffs which is then played at quite a few varied tempos and paces which gives this somewhat a semblance of variety as there’s a bit of something for all fans of these particular styles that’s covered throughout here. Though that does leave this with a highly simplistic melody-heavy sound, there’s not much else working here for the band as this presents the album with several flaws. The biggest issue here is the fact that the album never really presents much of a dynamic at all within this one as it’s mostly just a solely simplistic take on the style which really continues on without much change throughout that’s really obvious here. Even more to the point, it’s all pretty simplistic-styled chugging that’s not all that popular anymore with the short-changed, stuttering rhythms coming off as part of the metalcore scene from about a decade previous which makes the album sound far less original than it really should. That sounds far less interesting as well with the industrial keyboards charging away with the melodic harmonies as well, keeping them prominent in the rhythms though there’s some rather troubling nature with that style. Even still, there’s not a whole lot elsewhere beyond this factor.

Despite the fact that there’s some rather bland work here that comes from it employing uninspired riffing with some pretty overdone keyboards that turns this into rather rudimentary work, there’s still some rather decent material on display that makes this somewhat appealing only for the most devout fan of melodic death metal/metalcore.

Does it sound good? Order it from here:
https://open.spotify.com/album/2pkAOKMiCMGu2ONsIyQLsy
Posted by slayrrr666 at 2:34 PM