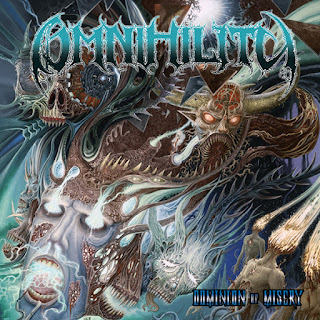 Continuing their onslaught of brutality, Oregon-based brutal/technical death metallers Omnihility have grown rather accomplished and competent to turn their mechanically-infused assault into a whirlwind of technical and brutal death. Being the first recorded output of the band for new members bassist Isamu Sato and vocalist Adam Toepfer, the groups’ third full-length album is released February 26, 2016 on Unique Leader Records.

Much like their previous works, this is mainly a finely-acute mixture of swirling, dive-bombing technically-challenging riffing that hurtles forth at rather frantic tempos that adds an overt brutality as the band whips up a frenzy of complex arrangements alongside the mechanical patterns with the occasional dip into a more mid-tempo chug-based pattern. This serves as a nice buffer to off-set the more brutal moments here with the tightly-wound, frenzied rhythms here containing a rather charging, chaotic focus with this series of riffing coming together incredibly well to deliver a competent, pummeling release that manages to whip through enough dizzying riffing to placate the tech-crowd while featuring the kind of frenetic rhythms that give the album a solid, brutal tone. Though the technical rhythms do end up winning out in the end, there’s plenty of tight, frantic brutality on display to really give this one plenty of appeal to that section as well with the tightly-wound rhythms offering up a fine amount of brutal rhythms. There’s only a slight issue with this one, as the album sounds way too mechanical and triggered at times to really breathe like the material really calls for here as the guitars really offer no depth or variety in their tone and stay on the same format for the album’s duration while the drumming is rather one-note choppy blasts without much deviation as well. Still, this one doesn’t really do a whole lot to hamper this one as there’s plenty to readily enjoy here.

With only a minor troubling issue that holds this one back and manages to get out plenty of enjoyably complex and challenging brutality which allows this one to readily appeal to fans of both the technical and brutal realms who can also manage to overlook the minor production issue that plagues this one which isn’t a part of others.