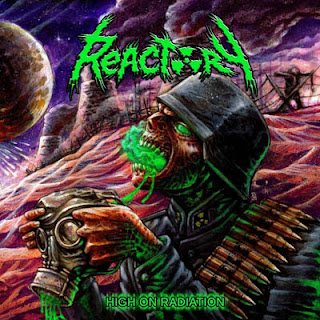 Initially formed in 2010, German thrashers Reactory quickly took their influences of American and European thrash acts from the 80s and have used those influences to carve a feral, rabid path of destruction through the underground. Following the replacement of original drummer Stachu Crash with Cauê Santos, the group prepares it’s full-length debut released March 14, 2014 on Iron Shield Records.

As is expected on an album as this, there’s the fact that the band is going through the rabid riff-work and charging patterns typically found in the German variety of thrash metal. The deep, jagged riffing and angular arrangements that often-times recall primitive black metal with their heavy churning patterns yet are still able to maintain the type of furious intensity in the main rhythms that became popular in the country’s acts in the first place. This produces a far more vicious and engaging energy here with the chugging patterns typified by this type of simplistic and hard-hitting brand of thrashing that goes for the more one-note approach than what is usually featured in the genre. By going for this strong mixture of churning ferocious thrash off-set by the more one-note chug-heavy secondary tactic there’s a rather impressive tight, confined atmosphere here that works incredibly well at displaying the old-school German wave of the genre while still opting for a more traditional style of dexterous, dynamic soloing that recalls the US school of attack. It’s all competent and engaging as a whole with this type of rabid approach yet the album runs into a sense of familiar far too often here as the band does go for the old-school German approach without much deviation and that tends to make this a wholly familiar and one-note effort. This is all typically well-played German-style worship for the most part, and doesn’t really offer up enough variety in this approach to really give itself much of a voice in the crowded field of imitators utilizing these elements. This is what tends to bring this one down somewhat.

Though there’s a few minor elements of identity crises to be found here which is to be expected with a band’s debut offering, there’s still enough to find engaging here with the powerful, competent performances and infectious enthusiasm managing to overrule the familiarity and make this a solid choice for German thrash aficionados or any fan of old-school or revivalist thrash in general.


Does it sound good? Order it from here:
https://reactory.bandcamp.com/album/high-on-radiation
Posted by slayrrr666 at 6:42 PM