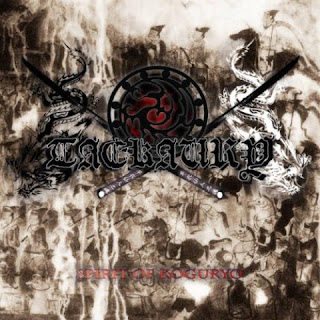 One of the most convoluted band history’s ever, South Korean one-man pagan black metallers Taekaury have a rather long history dating back to 2000, including two spells as Apparition before this current name and then as Malakh before changing back once again. Initially independently released in 2014, the group decides to re-release their debut full-length on July 30, 2014 on Fallen-Angel Productions.

Managing to infuse their sound into an enjoyable whole, the main element at play here is the fact that this one really contains quite an exotic and vicious sound through the traditional elements present. The riff-work is exceptionally enjoyable with the vicious rhythms running throughout here carrying this one along in mixing swirling tremolo patterns alongside the bands’ infusion of charging militaristic patterns and a pounding death metal sensibility to their drumming as this here offers a far more explosive influence in that style. This features quite a more pronounced heavier, plodding charge than would normally be expected in pagan black metal styles and lets this one charge along quite nicely with it’s galloping mid-tempo pace and twisting riffing that manages to make for quite an exceptional sound here, especially alongside the album’s rather fun tendency to include short snippets of localized sound-clips or musical passages to add to the exotic flavor. That said, there’s a few minor elements that don’t work well here which really comes from the second half of the album as this is a stylistic departure from the first part. Rather than carrying on the first where it was somewhat more energetic, the majority of the tracks in this section here come off a little more plodding and slower paced which turns their swirling riff-work into simply plodding, nearly lifeless sections that aren’t really that interesting. It’s about all that really doesn’t work here.

Though it’s not necessarily the most cohesive effort around with a few minor flaws to be found here with the album loosing some steam as it goes along, there’s some absolutely fun moments as well throughout here that make this enough to be worthwhile for fans of the localized sound or those that prefer a more melodious version of pagan-accented black metal.