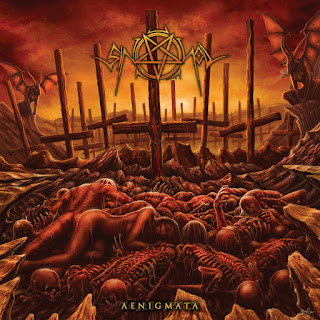 Taking their sound to it’s fullest extent, Hungarian old-school death metallers Sin of God have fully explored their devastating blend of traditional old-school death metal and a more technically-challenging grind to become one of the fiercest groups in their homeland. Now after four years of intense touring that has taken their work to a new level, the group prepares it’s second full-length effort September 23, 2016 on a co-release with Satanath Records and Murdher Records.

Carrying on from their previous releases, the group’s main attack here is a predominantly old-school approach that brings about the hard-charging chugging characterized by the US scene with a slew of ravenous, deep swirling riff-work that effectively evokes the churning atmosphere found there. As the tight, densely-packed riffing is given a rather blistering tone here with the full-tempo series of pounding drum-blasts and the charged, fiery technical riffing packed into it that manages to bring about the dynamic intensity along through the rhythms. The way this changes up between the tight, frantic and utterly blistering rhythms while still maintaining a strong, ominous mid-tempo lurch along throughout the tracks here while still managing that heavy, vicious energy is where this one really scores incredibly well here by offering up the burning technicality that charges along while still keeping the old-school tones present in utterly dominating fashion as the variety here is incredibly dynamic and manages to give this such a dynamic charge that there’s very little about the bands’ attack to dislike overall. The only issue that crops up within this one is the fact that the album’s got a remarkably low tone in which the guitars are recorded in, and though it’s dynamic, tight and crunchy there’s places where it tends to turn into a rather indecipherable blur of heavy buzzing rhythms that doesn’t become a detriment but is somewhat distracting with the way it causes them to come off. Still, there’s little else about this release to really cause an issue with.

Frankly this turned out to be quite the impressive and wholly dynamic offering that brings about many great positives and not a whole lot of issues here which are mostly just brought up by the production rather than any part of the music itself which really makes this such an intriguing choice for fans of old-school technical death metal or just old-school death in general.

Does it sound good? Order it from here:
https://satanath.bandcamp.com/album/sat158-sin-of-god-aenigmata-2016
Posted by slayrrr666 at 2:00 PM