Slaughterday - Laws of the Occult 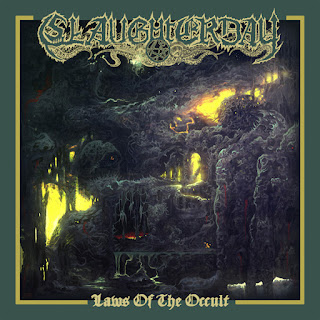 Since their foundation in 2010, German death metallers Slaughterday have remained steadfast in presenting a thorough and uncompromising approach to the old-school ways of death metal with their own distinctive touch. Continuing their association with F.D.A. Rekotz, their second album is set for release April 29, 2016 and solidifies the two-piece as major players in this crowded scene.

By and large this here is a mostly savage and unrelenting old-school style attack on display, which begins with the thrashing riff-work and simplistic approach. This is just straightforward, crushing mid-tempo death metal with very few tricks up its sleeve, working through a deep churning attack swirling with bouncy rhythms built along a thrash template without the technicality. In it’s place is a plodding crunch that keeps the tracks firmly in that dredgy, doom-encrusted tone that works so well in aping that old-school approach. This cavernous approach works quite well here with it giving the album a solid balance between the two styles, with it employing the tighter, more plodding paces that are slightly more doom-inspired while also allowing the launching pad for it to kick into that primitive thrash tempo where the band kicks up the energy and presents some more inspired and lively arrangements yet still wallowing in that murky filth permeating the rest of the album. Still, though, one can’t help but notice that all this old-school worship doesn’t detract from the fact that this isn’t in the slightest bit original, simply running through the same style of rhythms and arrangements that were accomplished in the genre’s infancy. Regardless of the competency and vigorousness of their attack, it’s still incredibly cliche and doesn’t really differentiate itself all that much even from the more modern apists of this style much less those originating the style, and it sticks out significantly here as being the only real flaw.

Beyond the one unoriginal facet of this album holding it back somewhat, there’s still the pressing issue at hand here that their style and approach pretty much renders them such a completist-only band for old-school followers and revivalist aficionados that it’s hard to see any other fan appreciating them other than these groups.