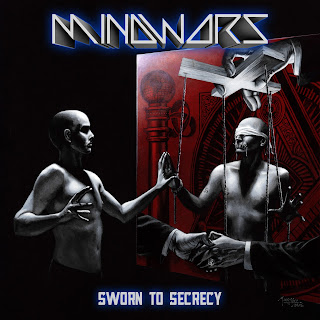 Following up the momentum of their last release, Italian/Los Angeles thrashers Mindwars have been following their chosen staple of late-80s thrashing alongside some punk and hard rock influences. With the two-year gap between releases allowing the band to get even closer to their old-school style along the way, the power-trio prepares to release their second full-length April 28, 2016 on Punishment 18 Records.

As is expected from the bands’ past output, this here is a raging and thoroughly ripping up-tempo attack with a series of strong swirling speed-metal patterns keeping this one charging forward with plenty of tight patterns throughout here. The punk influences carried throughout here make this one quite tight, simplistic and energetic while offering up plenty of furious intensity that goes alongside the raging riffing here with the thumping rhythm section and galloping drum-work that makes the tracks far more up-tempo and generally raging along to the mostly up-tempo sections filled with old-school arrangements that go blaring along throughout the different sections here. With this approach the band is able to generate the kind of up-tempo vibe mostly associated with the old-school scene, though it tends to make the album as a whole way too one-dimensional and rather devoid of deviation which does wear on as the album goes on. It’s just an endless parade of effectively-played old-school sounding thrash in tight, rabid one-note rhythms and doesn’t really get too much further away from that mindset, which does tend to cause this one to really play out it’s tricks quite quickly. As well, one of the tracks here is so soft and bland that it doesn’t fit with the rest of the aggressive material which lowers it somewhat further.

Though it does have a few issues with the repetitive rhythms really holding this one into being quite a one-note album for the most part, there’s still a lot more to really like here that it does manage to come off with a lot of enjoyable elements for revivalist fans to really enjoy as well as fans of the artists within the project.

Does it sound good? Order it from here:
http://www.punishment18records.com/release/sworn-to-secrecy/
Posted by slayrrr666 at 1:30 PM