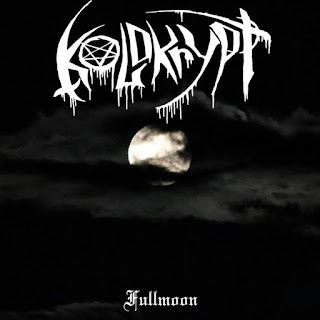 Coming together quite recently, French one-man black metal project Koldkrypt allows the creator by the name of Typhus to create a wildly varied and eclectic infusion of elements into black metal. Initially independently issued May 30, 2016 on a limited run, the debut full-length release from the project is now reissued July 5, 2016 on Sepulchral Silence.

Focusing primarily on a raw black metal sound, the main element at play here is the fact that there’s a pronounced and utterly dominant amount of material here that features fiery tremolo-picked riffing filled with the traditional brimstone-accented rhythms that bring about a feeling reminiscent of the second-wave worshippers. The straightforward, swirling tempos and blasting drumming are certainly on-point in that style as well which certainly helps further this connection to the genre even further, with the slew of far more traditional elements present in the arrangements and riffing keeping this grounded in those second-wave patterns so that once it starts to introduce other elements here in some progressive riffing that’s quite melodic while also introducing a far more technically imposing series of riff-work into the tracks which in fact creates a rather epic mind-set here with it going for some complex, convoluted arrangements that really drag on unnecessarily here which is somewhat of a big problem with this one. It doesn’t really know how to quit while it’s ahead, as there’s plenty of utterly impressive and dominant blasting patterns that are wrapped alongside a series of overlong, meandering rhythms that just seem to go on far longer than it really should, and that ends up making this feel quite longer than it really should be as these progressive elements just tend to make this quite a bit longer than needed. While that’s not a crippling factor here considering it’s a debut and is something that might get honed out over time, this does leave a big impression on the listener in the end. Otherwise, there’s plenty to really like and enjoy about this one.

Though it’s somewhat commendable to want to include everything possible to showcase your roots and influences on a debut effort like this, the fact that it’s somewhat dragging and meandering does become the main focus here away from the  remaining positives leaving this one mainly for progressive-minded fans of the original second-wave movement or those than can appreciate it’s flaws regardless.

Does it sound good? Order it from here:
http://koldkrypt.bandcamp.com/album/fullmoon
Posted by slayrrr666 at 11:12 AM