Grave (Swe) - Out of Respect for the Dead 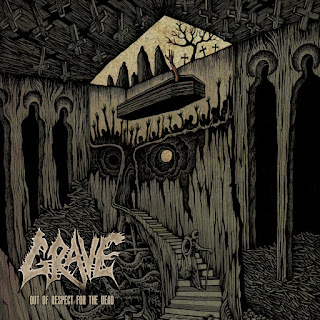 Living through the ups and downs of the genre, Swedish death metal legends Grave have persevered through the trenches of the scene and have persevered for the most part to have now survived close to three decades of existence. Now after a three-year gap between releases bridged by a compilation EP, the powerhouse four-piece offers their eleventh full-length effort October 16, 2015 on Century Media Records.

This one is quite an easy and refreshingly simple release to get a handle on as it’s once again a simplistic take on the Stockholm death metal sound brought to life by one of the genre’s inventors. This is full of the prototypical approach and style found throughout the genre with this one going for the blaring buzzsaw-style grind so heavily popularized here with the swirling riff-work throughout with the pummeling thrash rhythms keeping this one fast, vicious and thoroughly intense which gives the band it’s staying power. There’s a loudness and immediacy to these tracks that makes for a highly enjoyable section on the album letting the striking rhythms taking centerstage with it never really deviating much from this style under only a few select circumstances. These minor variations are where the group drops out of the relentless bashing to deliver more of a swirling mid-tempo grace to the tracks that offer up a strong, plodding pace and more dynamics in the riff-work which makes for a more dynamic attack by meshing the viciousness with the cool-down periods. It’s a highly-familiar and unoriginal approach yet here’s it’s not that big of an issue as this is a band that started it all and is in fact among the bands being imitated. The fact that they’re one of the groups that launched this particular style and have given rise to dozens upon dozens of other bands not only in their home country but also abroad must be taken into account so it’s not all that big of a detriment here with the familiar ring blaring throughout this one.

Still going strong and still churning out top-notch, high-quality Swedish style death metal the old-school way, this is still one of the strongest bands in the scene and with this legacy still has the final word on the matter when all is said and done which not only makes this a strong release for those into the Swedeath style but also old-school death in general.