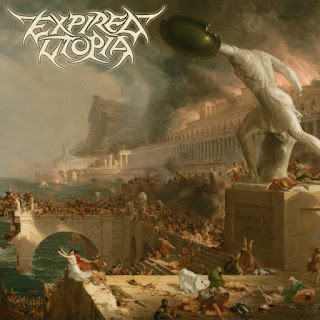 Comprised of scene veterans, Canadian progressive power metallers Expired Utopia were initially born from a mutual love of power metal with a vast and unique style ranging from symphonic to progressive and everything else in between. Bringing these influences to the forefront of their first release, the groups’ self-titled debut EP was originally released August 25, 2016.

For the most part this here is certainly whipped around the frantic, technical riff-work usually featured here with the album’s varied approach and dynamic patterns holding this one up throughout the tracks here. There’s a great sense of technical work here changing through a series of dynamic rhythms that soar through a grand series of strong, melodic rhythms and tight, pounding rhythms that all feature the strong technically-proficient riffing alongside it. Graced with occasional mid-tempo chugging that adds a strong melodic charge to these compositions, there’s a generally strong and imposing framework for the material here that generates the kind of dynamic patterns and melodic accessibility required for the genre.given that this is a bands’ debut offering, it’s not a hugely detrimental factor but there’s a sense of meandering riff-work and a lack of focus here on the tracks as they tend to go on simply feeling that’s what’s required to be in the genre through their influences and at times this makes the album seem like a chore to get through despite only getting three tracks. Though this can be refined and honed in the future, it’s still a factor here.

Though it gets into some problematic areas here with the overdrawn riffing not really going for the tight, clean work of their predecessors it has more than enough that does work here that with some minor refining this could be another solid and enjoyable band for fans of technical/progressive power metal or epic metal in general.

Does it sound good? Order it from here:
https://expiredutopia.bandcamp.com/
Posted by slayrrr666 at 1:23 PM