Far Beyond - A Frozen Flame of Ice 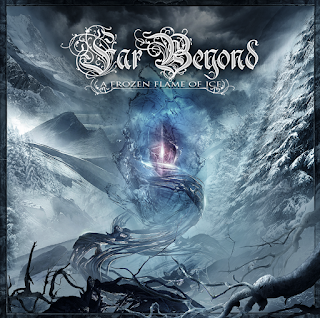 Finally returning to his main project, German one-man symphonic gothic/black metal project Far Beyond marks the full return of the group following a decade of silence with mainman Eugen Dodenhoeft coming back after working on other groups in the meantime. Now recharged and more focused than ever with solid session musicians, they release the second full-length effort September 1, 2016 on Aeterna Records.

From the onset here this one is pretty heavily stepped in the symphonic air as the keyboards are given a dominant presence here with plenty of work-outs throughout here which gets this one involved in a grand, epic soundscape quite easily. There’s numerous amounts of bombastic keyboards going throughout here alongside the album’s mostly straightforward riff-work that goes for a more Gothic-tinged atmosphere here with the way in which it goes for the incredibly simply speed-metal passages filled with brimming melodies and slow, plodding rhythms that flow throughout the majority of the work here. While the way it goes for the main rhythms are pretty much unyielding in that manner as it generates these elements for the main part of the album and weaves those bombastic keyboards into these sections with gusto as it’s a heavily symphonic charge that generates that majestic sweeping atmosphere perfectly alongside the album’s preponderance of clean vocals that gives it a wholly warm and bombastic atmosphere. Even when it goes for the fun of the ravenous drumming and explosive up-tempo melodies this one still gets in a lot of work to really like about it, with the album’s one main departure here coming in the form of it’s rather epic nature that makes this a challenge to sit through at times. It’s just a touch too long for some and really offers up plenty to like with the epic song-structures but is such a massive epic that it might be a challenge to get into. It’s not a big detrimental, though, and doesn’t come close to overcoming the remaining enjoyment found here.

While it’s a pretty hefty album on the surface of it all, that’s not nearly enough to dispell the fact that there’s just so much rather fun and enjoyably massive arrangements here that whip together the Gothic and black metal movements that it serves as a fine choice for aficionados of that style or just symphonic black metal in general.

Does it sound good? Order it from here:
http://farbeyond.bandcamp.com
Posted by slayrrr666 at 10:39 AM