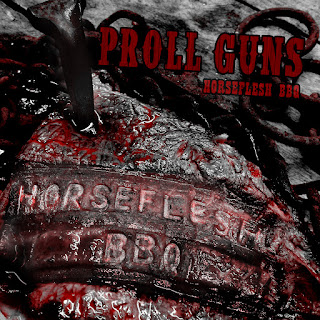 Following their explosive releases, Austrian western-based thrash-’n-rollers Proll Guns have been committed to bringing the raucous high-energy assault of their stage-show to a record and have brought their rock´n´western roll metal to a fine whole. Arriving straight from Hell through the Texas backwater, the power trio releases their second full-length album is released January 26, 2016 on NRT-Records.

From the start it’s all pretty obvious what the bands’ central gimmick really is and they put it to great use here with the inclusion of western-themed instrumentation and rhythms alongside the raging thrashing. From the use of banjos and old-west style rhythms interjected at regular intervals here, there’s a suitably dirty and dusty vibe straight from that time-period to go along with the strong thrashing backbone on display. With the rather thick and deep riffing that straddles the border between heavy thrash and hard rock and a steady, simple series of drum-work pounding away with the similar series of riff-work throughout here the overall influence here is quite readily a rough and hard-rocking effort that bursts out into a notable thrash groove to offset the more straightforward rock riffing, the whole effort carries that vibe along throughout here rather well. It’s main problem here is the fact that there’s just not as much thrashing in their sound as it really focuses more on the hard rock aspect more with the thick, heavy production keeping it sound like a groove-filled southern rock record with speedier sections at times which is where this one runs into a small flaw of being too stuttering and short-handed with it’s riffing to really sell the thrash as well as it should. Likewise, the influx of western imagery and themes in the music might be a little tough for some to swallow here with the differences being a bit too much for some to swallow, but it’s not as intrusive as it seems and offers enough to really like here to get it’s point across.

While it might take a while for some to get acclimated to it’s rather off-beat nature and genre variances that are present here, this one still manages to be quite a rather decent enough and listenable which should really appeal to those who can overlook those issues and those that find the western-theme encouraging with the hard rock/thrash appeal.

Does it sound good? Order it from here:
http://prollguns.bandcamp.com/
Posted by slayrrr666 at 10:39 AM