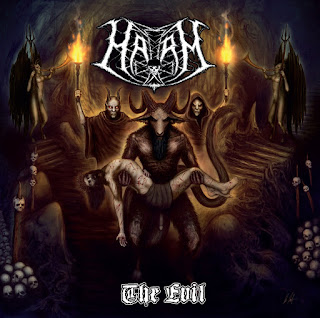 Storming onto the scene, the German death metal group Harm showed their mettle on the previous release and the storming impact featured here continues their ultra-heavy, mid-tempo old-school death metal attack. Being the first recorded output with new bassist Felix who joined several years ago, their second full-length is released June 18, 2016 on Final Gate Records.

As was established on their previous album, this here is generally a more mid-tempo and simplistic death metal attack that goes for large, sprawling vistas through the doom-influenced rhythms. This here is mostly just a singular riff repeated around a crushingly heavy mid-tempo pace that features scorchingly heavy swirling patterns that offer up a rather blasting impact with the group’s few outbursts of dynamic dexterous drum-work that accompanies this mostly simple-minded approach which is where this one really scores quite well. With the album’s mostly straightforward approach that opts for the chugging riffing and sprawling patterns in the arrangements, there’s plenty of utterly dynamic and crushingly heavy moments here where it takes the agonizing rhythms along through that series of rhythms here, and for extra variance it does nicely segue into a series of faster patterns propelled by some sterling drumming and urgent chainsaw-style buzzing riffing that ups the tempo into a feverish gallop which is a finely accented companion piece to the more dominant plodding tempos. While these here give this one such a rousing feel and tone, there’s a slight hint of repetition to be found here as this one goes about itself in a rather stylistically similar manner. So many of these rhythms and patterns are kept in the same general air through the majority of the tracks here that it can lead to a bit of a struggle to determine where things are with this one at times, though it’s not nearly as detrimental as expected here as this one has so much more to really like about it.

With plenty of positives to really get worked up about and only a few minor issues that really aren’t that detrimental to this one all that much, this has plenty of positive elements to be found that make it a solid, worthwhile choice for any fan into this brand of old-school flavored death metal or resolute revivalist fanatics that prefer this approach.


Does it sound good? Order it from here:
http://finalgaterecords.bandcamp.com/releases
Posted by slayrrr666 at 11:16 AM