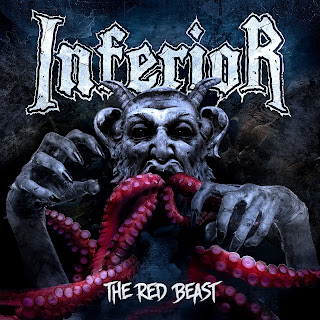 Following the success of their debut, Swedish thrashers Inferior have soldiered on taking the criticisms of their previous release to heart with a concerted effort to continue offering their quality output in a more compact, concise package. With the group firing on all cylinders and offering plenty to enjoy in the three-year gap between releases, their second full-length effort was released May 6, 2016 on Big Balls Productions.

For the most part this here is basically a strong and imposing blend of modernized thrashing with a series of strong, imposing riffing carrying this one along through it’s paces. The ability to offer up more compact, tighter patterns makes the most impact here for this one with it’s strong sense of frenzied, groove-paced patterns holding this one along it’s mostly frantic and intense rhythms as the riff-work here generates quite a lot of vicious, intense patterns. There’s strong hints of groove chugging in these sections to add to the intensity and viciousness, and when it’s dropped off in favor of the band going for the kind of intense jagged thrashing this strong combination of rhythms makes for a wholly vicious and intense beast. With the album going for plenty of vicious groove rhythms and the strong hints of traditional thrash moldings it does make for a wholly impressive and even dynamic mixture of incorporating the older-style song structures as well with extended epic intros alongside the tighter, more ferocious material that forsakes the old-school crunch in favor of unleashing pure sonic violence, and the often loud and rumbling patterns throughout here provide this with plenty of intensity. The album does have a slight tendency to get lost in the realm of offering brutal beatdowns at the expense of any kind of point here as it just tends to go on for quite a while just featuring plenty of rather intense rhythms that go by in a strange blur. Otherwise, this one has plenty of enjoyable moments here.

While it’s a vicious and violent affair that offers up plenty of enjoyable moments, the fact that it gets caught up in a series of unrecognizable blurs of rhythms does keep this down from what it could’ve been, yet those positives here are more than enough to appeal to fans of more modern vicious thrashers.

Does it sound good? Order it from here:
https://www.facebook.com/inferiorswe
Posted by slayrrr666 at 12:52 PM