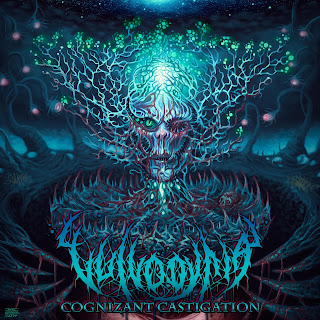 Starting in early 2014, South African slammers Vulvodynia have quickly stormed that specific scene that allowed them to form their first releases in the calendar year with an EP released quickly before this first release. Still continuing the trend of including an instrumental version of the album alongside the regular release, the bands’ full-length debut was originally released in that manner October 31, 2014 before another release December 11, 2014 on Vicious Instinct Records that dropped the instrumental versions and is now ready for a vinyl re-issue in September 2016 on Transcending Records.

Offering up plenty of brutal moments, the dominant aspect to be found here is the high-impact slams that are featured throughout here which manage to generate a large amount of the work within the album here. The slow, heavy wave of riffing present here is rather impressive and dynamic, offering the kind of generous slam patterns to be featured heavily while weaving between the tight deathcore-styled breakdowns and the stylistic chugging that pops up here leading into the next wave of slams. That level of violence is kept up pretty consistently here with the vicious riffing holding the slam patterns up-front and center here which gives it the kind of room to maneuver throughout the main rhythms that also manages to feature much more traditional brutal death metal blasting in their attack with some stuttering syncopated riffing and tight choppy patterns that are incorporated incredibly well alongside the slams and chugging. Though all of this is quite fun and makes for a wholly enjoyable slam-based release, the fact that the album is just way too overlong and contains too many tracks is the main downfall here with this one seemingly going on somewhat past it’s useful point as it gets to a point of being yet another over-the-top beatdown with slams and chugging riffing that the album does feel incredibly overlong here with this many tracks here offering the same overall approach, and it would probably be utterly unbearable with the instrumental versions tacked on that also comes as a potential release variant.

While their main point of dissent here is merely the overanxious zeal of a debut with too many elements featured and feeling quite overcrowded, there’s more than enough here to really like about it that there’s plenty of appeal here for any kind of brutal or slam aficionado to really get into with this one.

Does it sound good? Order it from here:
http://www.transcendingrecords.com/cgi-bin/productDetails.cgi?pid=9501&cid=
Posted by slayrrr666 at 11:37 AM