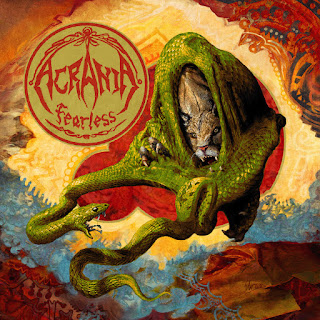 Honoring their commitment to their genre, Mexican experimental death metal explorers Acrania are continuing to fuse their extravagant Latin roots with charging death metal rhythms, and the group’s full potential is quite a unique experimental side. With their full compliment of musicians again providing this one with fantastic work all around, their third full-length album was independently released April 25, 2015.

As is to be expected here considering their origins, the band is really all about exploring the connection between their latin hometown and more traditional metal roots with a fiery display of mainly Latin percussion and rhythms in their arrangements as the dominant factor here. Offering up such non-traditional death metal instrumentation here from the trumpet, saxophone and other discordant jazz percussion amongst their rhythms with plenty of fiery death metal riff-work thrown into the mix, the result is incredibly dynamic and offers up plenty of strong dissonant and utterly schizoid arrangements that recall more of a freeform Latin-influenced jazz band than traditional death metal. The strongest point here is that this works for the bands’ favor as this bizarre mixture is strongly performed while giving them a truly unique and original voice in the genre by combining two seemingly disparate elements that shouldn’t come together at all sound quite fun together and even with the challenging nature of the arrangements it’s still a highly listenable and enjoyable effort with plenty of enjoyable elements about it. Though it does work quite often, it does stumble at times where it’s plodding Latin rhythms and percussion here end up causing this to slow down into samba or salsa-styled tempos that are so far from traditional metal-works that it might turn off fans here looking to see this infusion work as it reminds the avantgarde nature of this mixture too much. Still, there’s too much to really love about this one that it’s barely a detriment and not all that impactful all that much.

Graced with plenty to like here with a strong, unique voice with their strong and enjoyable mixture of work that’s truly one of the most dynamic attacks in this style, there’s plenty of enjoyable elements on display for fans of adventurous Latin-flavored metal music to get into this one or those inquiring about the potential of the fusion on display.

Does it sound good? Order it from here:
http://acraniaofficial.bandcamp.com/album/fearless
Posted by slayrrr666 at 12:02 PM