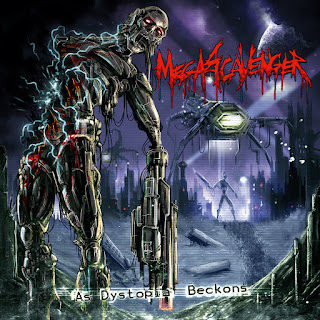 Artist: Megascavenger
Release Title: As Dystopia Beckons
Year: 2016
Label: Selfmadegod Records
Genre: Swedish Death Metal
Tracklisting:
1. Rotting Domain
2. The Machine That Turns Humans into Slop
3. Dead City
4. As the Last Day Has Passed
5. The Hell That Is in This World
6. Dead Rotting and Exposed
7. Steel Through Flesh Extravaganza
8. The Harrowing of Hell
9. As Dystopia Beckons

One of the numerous bands in his resume, Swedish death metal project Megascavenger are part of multi-instrumentalist extraordinaire Rogga Johansson’s never-ending series of bands dedicated to keeping the flame alive for the original wave of Swedish-flavored death metal. Again gathering a horde of accomplished scene vocalists to join his instrumental assault, the projects’ third full-length album was released March 1, 2016 on Selfmadegod Records.

As is usual with Rogga’s trademark style, the main focus of the album is atmospheric Swedish death that whips the familiar churning buzzsaws through the blazing tremolo-accented riffing and plenty of flowing buzzsaw grooves that make for the ever-present Stockholm-style brand of Swedish death metal. Rumbling along with plenty of tight rhythms and the occasional burst into the charging mid-tempo chug patterns that make for quite a stylish burst of old-school Swedish death metal, and with the different vocalists present do give the songs a somewhat different vibe here with the different growling and shrieks generating a wholly varying atmosphere. This goes along with the album’s main drawback in the enhanced usage of industrial keyboards. This is so prominent in the second half of the album that it really derails the intensity and savageness of the first half and drags the album down considerably. It sounded so good and pummeling with the traditional Swedish-accented riffing and pummeling rhythms throughout here, yet this blaring, one-note keyboard work that just barges in on numerous tracks and drowns out the riffing or merges itself alongside these patterns causes it to really suffer from a sense of conflicting tones too great to really get the most out of what’s presented with the fun-if-derivative riffing providing this with some fun tracks yet this clanging intrusion really saps a lot of that out. It works on a few tracks as backing accents, but it really goes down when it overtakes the music which causes it to suffer.

Though it’s got a rather big and glaring problem to really overcome here in the hopes of getting to really like this one, there’s more than enough positives to like about it when it’s on that this one really seems to be in a strange middle-ground where Swedish-styled death fanatics who can stomach the industrial might like it while it might not have enough to please industrial fans, though any fanatic of Rogga’s work in general is advised to check it out.

Does it sound good? Order it from here:
http://selfmadegod.bandcamp.com/album/as-dystopia-beckons
Posted by slayrrr666 at 1:05 PM