Toxic Waltz - From a Distant View 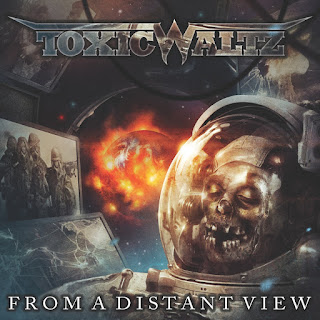 Continuing on from their strong debut, German thrashers Toxic Waltz have spent the dividing time honing their skill-set on the live stage with numerous gigs and shows to further their dedication and passion for the genre to it’s fullest. With a two-year gap between releases dedicated to showcasing this to the fullest, the group’s second full-length album is released March 18, 2016 as their only release on Violent Creek Records.

As was featured on their previous release, this one here opts for the rather tight and crunchy Bay Area style of old-school thrash which is displayed quite prominently throughout here. The album’s focus on razor-sharp, crunchy patterns and generally dynamic riffing filled with steady chugging gallops given a rather expansive melodic edge that’s effective at easing the intensity down from the rhythms. This does indeed manage plenty of efforts that thrash away with great energy and abandon when the time calls for it here, and it’s frequent enough that there’s a rather obvious softening of the rhythms here as the album goes along that favors the melodic accents to these riffs rather than blaze forward with the intensity typified in the genre as these are most prominent on the soloing throughout here. Those are the most obvious displays of this charge here and that manages to work quite well for the album’s case here in offering a slight deviation from the swarm of revivalist bands out there not really offering much difference between each other, though that does cause this to lose a bit overall as the efforts to import some melody into the rhythms does bring down the manic thrashing which is quite accomplished here. Still, there’s not a whole lot really wrong here with that basic attack.

Despite some minor issues present here, this one really turned out quite fun and enjoyable enough with a lot of enjoyable elements that will really appeal to most fans looking for something more melodic and accessible from the revivalist camp though others looking for the pure aggression and intensity are also advised to check it out.

Does it sound good? Order it from here:
http://toxicwaltzwebshop.bigcartel.com/product/from-a-distant-view-album
Posted by slayrrr666 at 12:16 PM