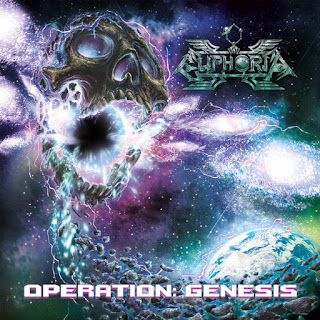 Despite initially forming in 2012, Detroit thrashers fully came together in January 2016 when the demise of local crust/thrash band Axe Ripper brought the bands’ line-up to completion and insured plenty of ravenous live-gigs to hone their craft. Quickly ushered into the studio, their debut full-length depicting a concept album of an alien race attempting to wipe out humanity by overheating the Earth’s core was initially independently-released May 19, 2016.

Despite the rapid acceleration of the bands’ schedule, there’s very little signs of that here with this one readily showcasing a far more frantic and vicious assault than what would be expected of a band this early in their development. The tight, dexterous riffing is primarily centered around the typical Bay-Area crunch with a much more pronounced and obvious technical skill-set, offering up the same propulsive drive usually associated in these sections which manages to enhance the the utterly furious riff-work that ranges from a steady mid-tempo gallop to a frantic full-throttle charge. Graced with these technically-challenging riffing and a strong sense of melodic firepower both in a strong set of accents to the main thrashing riffing and the dexterous soloing that carries itself off incredibly well by merging the boundless thrashing with plenty of appealing melodic beats sprinkled amongst the bands’ work. Though the band is rather accomplished and successful with their technicality displayed here which is quite obvious and just this short from being labeled progressive, it does the band in on a few occasions where it seemingly goes on too long either letting the riff explore plenty of erstwhile but overall useless tangents or just going through drawn-out extended sections that make for a slightly overlong experience than what is really necessary which pops up most frequently on the second half. Still, that’s a minor spot here compared to the great work established elsewhere.

Though there’s a few areas where it could’ve been slightly trimmed up a touch and held back in others, the fact that this is still a wholly fiery and viciously energetic blast of old-school inspired thrash that it manages to overcome those quite easily giving this one a ton of appeal to old-school thrashers or revivalist aficionados looking for some enjoyable bursts of the genre.

Does it sound good? Order it from here:
http://euphoriadetroit.bandcamp.com/releases
Posted by slayrrr666 at 12:35 PM