Ungod - Bewitched by Sins and Lust 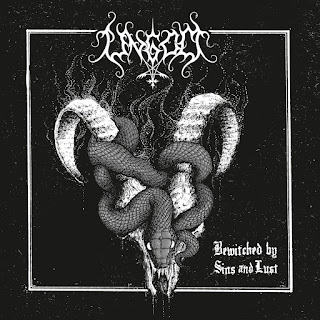 Artist: Ungod
Release Title: Bewitched by Sins and Lust
Year: 2016
Label: Final Gate Records
Genre: Old-School Black Metal
Tracklisting:
1. Inner Sight
2. Of Light and Darkness
3. Possessed in Trance
4. Of Flesh, Blood and Brimstone
5. Path of the Apocalyptic
6. Bewitched by Sins and Lust
7. Dust on the Cross
8. When Darkness Dims the Sky Above
9. Blessed by the Whore

One of the country’s biggest genre outfits, German black metal legends Ungod have certainly been much more prolific in their second incarnation now as the combination of splits and full-lengths outweighs the groups’ first output. Now onto their second full-length in the reunion and their third overall, this was released May 1, 2016 and is the bands’ only release for Final Gate Records.

As expected here considering their legacy and history, there’s plenty of ravenous old-school black metal to be found here. The group’s approach of utilizing frenetic, swirling tremolo riffing and plenty of savage drumming blasts creates a mostly frantic assault of gravelly, old-school black metal which works rather well here in giving this one a highly enjoyable chaotic bent in their rhythms that’s much more explosive and frantic than really expected when the group goes for the more up-beat tempos. The penchant for slowing down and giving into a more relaxed, mid-range style as present here does manage to come off rather nicely with the plodding patterns coming together nicely alongside the blistering, frantic patterns and frenetic, blasting drumming which is all wrapped up together quite well as these make for a seemingly coherent, raw old-school effort. Frankly, for as good as this approach is, the album does still feature a rather difficult nature to get over in the inherently raw sound and vibe present here which is quite a bit removed from the typical sound expected on such a release as the mostly low-quality production here really only favors the riffing as it’s got a decent enough sound but doesn’t really do much for anything else as the drumming is loud, clattering and sounds far away from the rest of the music, the bass is simply clanking away without much rhyme or reason and the vocals are weak-sounding horror-filled shrieks without much power or deviation in them which makes them feel quite low overall. It’s a pretty detrimental problem here but not a crippling one.

Despite some problems, there’s still enough to enjoy about this one as it does have enough to really like here that it does manage to overcome enough of them to be worthwhile enough mainly for fans of the rawer-style of old-school black metal or fans of the band in general, though others who like a slight bit more polish in their experience should heed caution.


Does it sound good? Order it from here:
http://finalgaterecords.bandcamp.com/album/bewitched-by-sins-and-lust
Posted by slayrrr666 at 1:23 PM