Rising Dark - A World in Ruin 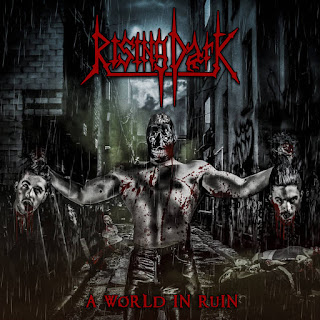 Forging on with their old-school style, Italian thrashers Rising Dark have forged onward with plenty of rabid rhythms and a charging attitude that really celebrates the bands’ old-school that carries on throughout their career. Being the last recorded output of guitarist Stanley Bleese before he was replaced by Gianmarco Bambini as well as the first for bassist/vocalist Danielle Rossetti after replacing Hassan, the group’s second full-length was originally released April 12, 2016 on White Tower Records.

As was present on their previous release, once this gets into the music part it’s a rabid and certainly well-played offering of Bay Area-inspired old-school school of thrash which really goes for the same tight, fiery riffing crunch that generates the kind of rabid energy typically found in that school of music. That creates a rather frantic approach that works itself quite frequently throughout here as there’s a strong series of charging if still mid-tempo thrash riffing throughout here that goes for a rather impressive charging crunch that’s mixed nicely alongside a nice sprawling series of rhythms that are much more wholly appropriate in a thrash act with their rhythms alternating between the dynamic galloping thrash with a nice set of melodic atmospheric sections buffering the material quite well. This attack, though, is simply straight from the playbook of the Bay-Area school of attack that’s been copied over by countless revivalist bands over the years, and despite the competency and energetic output of their rhythms one still can’t help but be reminded about that factor throughout here in that this one really doesn’t do much that distinguishes itself from many of its peers in terms of trying to forge a solid identifiable sound all their own. This certainly comes close several times with it’s straightforward charge getting some rabid thrashing in its upper tempos but that doesn’t carry enough throughout here to hold itself apart from the rest of the pack.

Despite some minor issues where it’s really focused on the usage of rather familiar and overwrought rhythms that have been used countless times over before them, there’s still a fine energy throughout here that makes for a solid and enjoyable if non-essential release basically for the most devout and ardent revivalist fans for the most part.

Does it sound good? Order it from here:
https://whitetowerrecords.bandcamp.com/album/a-world-in-ruin
Posted by slayrrr666 at 4:20 PM