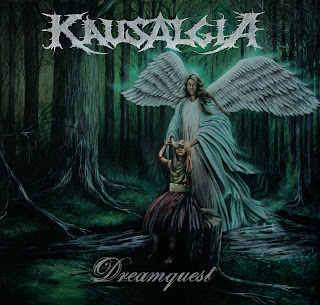 Initially formed in 2004, Finnish atmospheric black/dark metallers Kausalgia spent numerous years as Hypotermia until a moniker change in 2010 as well as a style change from a rawer form of black metal into their more common atmospheric sound. As they’ve taken their time to hone this set-up, after three years in the studio the group finally prepares it’s full-length debut to be released July 18, 2016 on their own label Saarni Records.

From the beginning there’s a rather heavy blend of atmospheric and rather melodic blend of black metal that seems to be built around the tight, frantic series of swirling tremolo riff-work. That wraps into a mostly dynamic attack with the strong swirling patterns taking up plenty of rather impressive tempos here as the straightforward approach keeping the riffing rather frantic and furious. That atmosphere is allowed plenty of leeway to work with the album’s main penchant for utilizing long, drawn-out simplistic dark metal rhythms that bring these to a grinding halt with their rather plodding paces and a dropping of the atmospheric rhythms for more melodic tones that just really doesn’t offer up much in terms of generating the necessary energy to keep the black metal elements in check throughout here. From the soft, near-romantic rhythms that are accompanying the drawn-out, plodding paces alongside it all together in one package to the simple riffing patterns, there’s not a large amount of enjoyable elements present in these sections to keep this one interesting and they tend to grind the album to a halt with their bland rhythms. Frankly, the fact that this is still a debut album does mean this gets somewhat of a pass due to the group still trying to find their sound but it’s far more enjoyable without those elements present.

Though it does have a few problems here with the dark metal rhythms being rather bland at times, there’s still some rather enjoyable elements present here to provide enough of a launching pad as they go about their career in the future that they are a quite intriguing group for those who prefer this type of effort for the most part.

Does it sound good? Order it from here:
http://kausalgia.bandcamp.com/
Posted by slayrrr666 at 12:29 PM