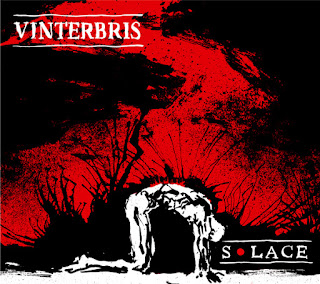 Following up the acclaim of their debut release, Norwegian melodic black metal band Vinterbris have quickly risen up the ranks of the scene and their homeland’s greatest genre acts that’s all culminated in one of their finest releases yet. Being the last release with original guitarist Richard Hemre Dahle before being replaced by Fran Ramirez, the group’s second full-length was originally released June 16, 2014 on Nordavind Records before a vinyl reissue September 16, 2016 on Triton’s Orbit.

This here is quite an impressive assault which manages to round itself out into numerous rather appealing facades. The most impressive is the fact that this one drags itself through highly-melodic and enjoyable riffing that still retains the fiery tremolo-picked style in the frantic up-tempo realms while still generating plenty of harmonious leads that makes this all the more imposing. By dropping the tempo down in the middle of the tracks for extended segments of melodic atmospheres that are wrapped in completely furious patterns, it creates an enhanced level of harmonic nature by balancing the extremely aggressive traditional black metal fire with strong melodic moments, and given that there’s plenty of truly ferocious moments still within this one makes for a rather impressive blitz. Even the other additional elements present here, from the more pronounced technical riffing which gives this one a much more dynamic series of rhythms while letting it simply blast away on it’s other riffing patterns and bringing in some acoustic instrumentation to accompany the melody lines throughout here give this one much more to like in the bands’ overall attack. Though this makes for a generally enjoyable time, this still has a minor issue in the fact that there’s just not a whole lot of time here to get acclimated to the bands’ approach. It really feels quite short-changed here even with the rather overlong and fully-loaded rhythms that are apart of the multi-faceted tracks here which is quite an odd feeling but it does become prominent enough to get noticed. Otherwise, this one has plenty to like here.

Though it’s a bit rushed yet seems a little overlong which is a rather unusual facet, the fact that there’s still a large amount of quality work displayed here with the strong riff-work and utterly impressive melodies that are prominently featured here makes this a strong effort for those into the more melodic black metal sound.

Does it sound good? Order it from here:
https://www.tritonsorbit.com/collections/releases/products/vinterbris-solace-slipcase-edition
Posted by slayrrr666 at 1:28 PM