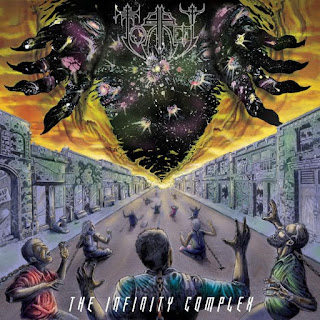 Exploding leaps and bounds in a few years, Canadian thrashers Torrefy have showcased a remarkable and obvious growth from their previous work by enhancing many of their positive traits while largely abandoning many of the weaker elements. Offering up a new celestial-thematic concept within the album which matches the epic scope of the material, this second full-length is independently released August 19, 2016.

As the last album clearly showed, the bands’ initial approach of simplistic thrash has been largely jettisoned in favor of a more progressive-tinged affair that allows for a more obvious technical showcase than originally appeared here. The riffing is strongly complex and much more challenging than the original’s simplistic approach that didn’t really leave this one much room to really explore their more enjoyable patterns that were present. Here, this one allows the band to explore a much more prominent and obvious series of rhythm changes with the group able to go from a more simplistic sprawl to a generous mid-tempo gallop and then onto a full-on blitz of charging, challenging riff-work that’s quite impressive as the improvement and advancement in this area is exceptionally evident and displayed across the album as a whole. Still, there’s the one issue that wasn’t fixed in that the lead singer isn’t the most appropriate for the type of material played here with his hoarse, snarling rasps wholly at odds with the rest of the music here with the shrieking seemingly more in tone for a black metal album than a true thrash-style work which this one is. Even with this factor, the album’s main factor lowering it is the exceptionally bloated and somewhat overlong tracks here which are quite longer than what they really should be as the album seemingly goes on far longer than what is necessary. The riffing is seemingly endless and really has no need to be this long as the album clocking in around the forty-five minute mark would’ve given this a huge boost. While these here do make this one somewhat lower, it’s still a huge, marked improvement over the original.

Despite being a touch too big for what it’s trying to go for, this here is such a markedly improved album that changes up their old simplistic formula for a more challenging and progressive side that might need some ironing out some more considering the change, and really leaves this one for progressive-minded thrashers or fans of the band in general.

Does it sound good? Order it from here:
http://torrefy.bandcamp.com/album/the-infinity-complex
Posted by slayrrr666 at 1:52 PM