Kinnefret - The Coming of Age 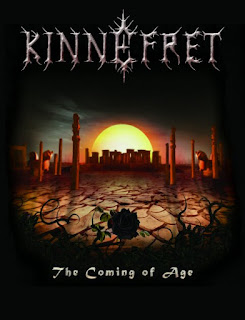 Formed in July 2011, Oakland melodic death/thrash newcomers Kinnefret have struggled with numerous lineup shuffles throughout here which whips through a series of members that continues to this day. At the time of their debut release that was independently released in May 2016, the Persian-inspired group was stable enough for a complete lineup before bass player Arses Ariamanesh left the group after the recordings.

Once this gets going, the band is quite clearly adept at their style throughout here which manages to take equal influence from the death and thrash scenes with it managing to fully utilize the kind of technical thrashing patterns as the main basis here. It’s a tight, technical series of riffing that carries plenty of up-tempo vibes throughout the running time here as these are mixed alongside more modern-sounding rhythms with hints of groove and breakdowns to generate the kind of explosive, violent feel with the choppy patterns and dynamic dual vocals helping to generate the death metal tone here. That’s in the backburner of the group, as the intensity of the more modern rhythms and stylistic melodies that crop up here are much more dominant throughout here. What also stands out quite with the album is the influx of Persian melodic accents also becoming quite prominent here in appropriate formats with minor accents sprinkled throughout the album and generating the kind of distinct flair that helps to compensate for the album’s lone falling. The main drive here being the use of the violent, vicious rhythm-work does give this a great intensity with it’s furious blasts, but it also causes this to come under so many more prominent labels here which causes the band to become yet another band in the field with this approach. While the Arabian melodies is a distinguishing factor, their more dominant aspects do feel quite similar-sounding to numerous other groups in this field.

Though it suffers somewhat from over-familiarity here due to the rather frequent use of familiar rhythms in their general approach here, this is still a highly-enjoyable and impressive debut that starts them off on a fine note which should appeal quite nicely for fans of modern melodic death metal or those looking for something else to compliment their collection.

Does it sound good? Order it from here:
https://kinnefretmetal.bandcamp.com/releases
Posted by slayrrr666 at 1:41 PM