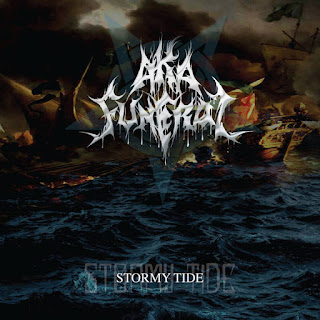 Formed in 2014 in Belo Horizonte, Brazilian black metal trio Aka Funeral have quickly risen from the underground after a year of writing and rehearsing that has brought out the bands’ first compositions in a very grand style. Completed earlier in the year and initially independently released June 16, 2016 the effort was eventually re-issued June 27, 2016 on Sepulchral Silence.

For the most part this is a pretty simplistic and savage offering that’s mostly centered around up-tempo rhythms filled with plenty of melodic riffing alongside these patterns. The trinkling tremolo-picked main rhythms here give this one plenty of swirling patterns played at rather frantic tempos to off-set those melodies, and with the benefit of much more jangly riff-work and blasting drumming along these patterns it gives this a rather traditional second-wave approach before being furthered by the tortured rhythms and frantic charging blasts that offer up the sort of melodic accents that accompany the kind of varied tempo changes which allow for a more melodic element to be featured. Though still quite raw and gravelly, there’s plenty of strong atmospheric melodies featured here alongside the blazing traditional black metal and the rather frosty rhythms which generate the kind of featuring plenty of the rumbling patterns. That gives this plenty to like here, almost enough to hold off the album’s main flaw in that there’s just not a whole lot of material here with it’s rather low running order in tight, cramped tracks that aren’t quite that long. It’s given this short running time that doesn’t have all that many tracks here which don’t feature many different notes between them and it’s brevity that makes this go over quicker than it really should. Still, this one isn’t all that terrible an effort.

Despite the rather minor issue here with the type of tracks not really working quick well with the short running time not offering up enough variety, the amount of quality work here is still more than enough to give this a worthwhile look for those into the rawer, more simplistic side of melodic black metal as well as old-school fans in general.

Does it sound good? Order it from here:
https://akafuneralblackmetal.bandcamp.com/releases
Posted by slayrrr666 at 3:31 PM