The Projectionist - The GallowForest Eulogy EP 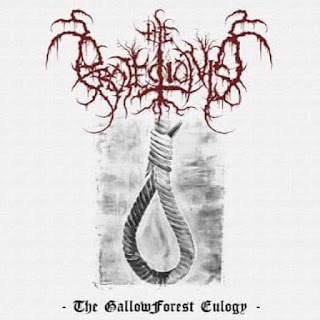 Coming together just last year, Canadian black metallers The Projectionist have quickly set-up themselves to be a prolific act in the genre with not only a full-length album but this new EP to be released shortly afterward. Carrying on their unique brand of depression and solitude to the traditional black metal aesthetic, this is officially released August 6, 2016 on Appalachian Noise Records.

This here is quite a decent and overall fine if minimalist black metal effort. A lot of this one is based around the repetitious and droning riff-work where it’s mostly based around light strumming with a decidedly raw edge to things, making for a simplistic edge with this one taking the same general arrangement on throughout the entire effort. The minimalist nature and plodding tempos here really tend to highlight the album’s depressive tone and arrangements quite well, going for the helpless, atonal vibe that’s been a consistent part of what they’ve been about from the beginning, which really carries on with the squealing, wailing vocals that really add to the whole depressed and lonely atmosphere typically found in the genre. That in itself is the biggest advantage and problem associated with this one, as there’s not much else on display here beyond this slow, plodding and somewhat lifeless melancholic material that expresses such a misanthropic nature that might not be for everyone. This is such a strictly limited appeal effort that it’s relatively impossible not to get others into what’s going on here, generating little else to others beyond what is there only for the genre’s die-hard fans that it’s likely going to be a dull, rather bland effort for most.

Though there’s some generally appealing material on display, the fact that it’s such a rather one-sided affair with little else worthwhile here for others that in this sense the only appeal here to be found is for the depressive black metal fanatic while all others should heed caution or outright avoidance in this case.

Does it sound good? Order it from here:
http://thetrueprojectionist.bandcamp.com/releases
Posted by slayrrr666 at 10:35 AM