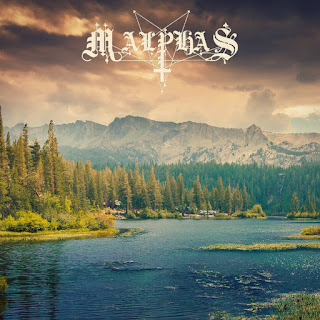 Taking it’s cues from the scene as a whole, Michigan-based one-man black metal project Malphas is one of two United States-based artists with the name and have taken more of a black metal approach that’s to be expected being a solo project. Finally coming to grips and producing a debut release EP, this was initially self-released July 8, 2016 before a re-issue on Sepulchral Silence July 16. 2016.

From the outset here this one is quite adept at delivering the kind of sort of sprawling old-school style mixture of black metal with a highly atmospheric design that’s highly enjoyable. With the blistering swirling tremolo rhythms accompanying the majestic mid-tempo pace and moving alongside the strong addition of deep, churning patterns that bring about a rather impressive series of deep chugging patterns that’s highly enjoyable overall here. The addition of this against the ravenous swirling riff-work creates a rather tight, up-tempo charge here alongside the rather majestic, swirling atmospheric charge layered alongside these patterns with plenty of extended sprawling sections and overlong, melodic intros that adds a rather engrossing sound as well alongside these more traditional rhythms that lets this one get the fire and intensity out alongside the majestic and melodic nature quite nicely. The fact that being a debut EP release makes this one seem a little too short at times and it’s a case where it’s so engaging and enjoyable as it is that to then have the energy cut short with it being done and over with is a little troubling, but overall there’s not much else to complain about here.

Though it’s rather short which is a shame considering it’s an EP and not really graced with enough tracks, the project is clearly an engaging one with a lot to offer that should make for an appealing venture as they continue onward and gives this release plenty to like for both the atmospheric and old-school crowds equally.

Does it sound good? Order it from here:
https://sepulchralsilencerecords.bandcamp.com/album/malphas
Posted by slayrrr666 at 3:26 PM